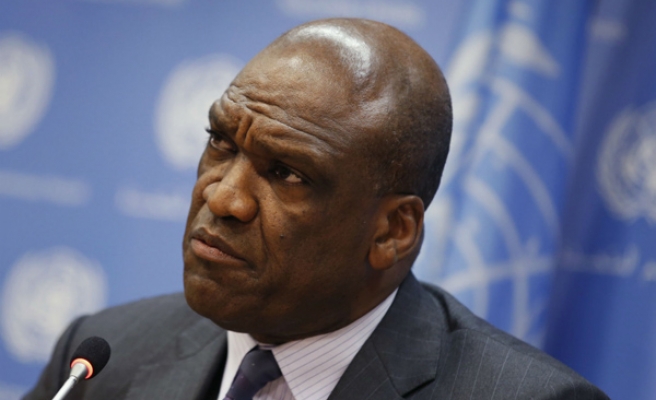 A former UN General Assembly president was accused Tuesday of participating in a broad bribery scheme that also involves a prominent Chinese millionaire, according to media reports.

Prosecutors say John Ashe, president of the 68th session of the UN General Assembly, took more than $500,000 in bribes from Ng Lap Seng, a real estate developer based in the Chinese territory of Macau, and other businessmen, local media reported.

Ashe, who is from Antigua and Barbuda, is one of six people named in a criminal complaint filed in a New York federal court.

The charges came as part of a widening probe into Ng, who was arrested by FBI agents in New York last month and charged with bringing more than $4.5 million in cash to the U.S. under false pretenses, according to the New York Times.

Ashe, who was reportedly arrested Tuesday and is being held, used “his official position to obtain for Ng potentially lucrative investments in Antigua”, said the complaint, as quoted by the New York Times.

Ng is said to have close relations to the Chinese government and be a member of a senior political advisory body, the Chinese People’s Political Consultative Conference.

Ashe was elected president of the General Assembly’s 68th session in 2013 while serving in the dual capacity as his country’s permanent representative to both the UN and the World Trade Organization, according to the UN.

A press conference is scheduled for late Tuesday morning to by the U.S. Attorney's Office for the Southern District of New York.