More than 150 people across the United States have been diagnosed with measles. 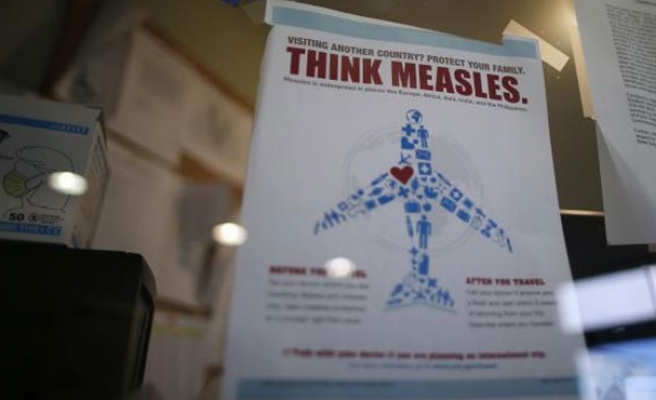 A senior California health official said on Thursday the source of a measles outbreak that has sickened 119 people in the state may never be identified, despite a finding that the same strain of virus had led to a wave of illness in the Philippines.

More than 150 people across the United States have been diagnosed with measles, many linked to an outbreak that authorities believe began when an infected international traveler visited Disneyland in late December.

California Department of Public Health researchers who genotyped specimens from 30 of the state's measles patients found all were of the same strain that caused an outbreak in the Philippines.

That same genotype has been detected in at least 14 countries and six other U.S. states in the past six months, the researchers said, and the source of the illness that sickened visitors at Disneyland has not been found.

"It is unlikely that the source of this outbreak will be identified, and although identifying the source would be of interest, our immediate goal is to stop the outbreak and it is not necessary to know the source to do this," Dr. Gil Chavez, deputy director of the California Department of Health, told Reuters.

Chavez said identifying the measles genotype could help determine the country where the initial measles exposure occurred but would not help officials stop the spread of the highly contagious virus.

The Disneyland resort in Anaheim receives millions of visitors a year, many of them coming from overseas.

The measles outbreak has renewed a debate over the so-called anti-vaccination movement, in which fears about potential side effects of vaccines, fueled by now debunked research suggesting a link to autism, have prompted a small minority of parents to refuse inoculations for their children.

According to the California health department, 39 of the 119 people who contracted measles in the state were believed to have been exposed while visiting Disneyland. An additional 35 had contacts with those people in a household or community setting.

The state health department said 45 other cases had an unknown exposure source but were presumed linked to the Disneyland outbreak.

Measles was declared eliminated in the United States in 2000 after decades of intensive childhood vaccine efforts. But in 2014, the country had its highest number of cases in two decades.

Most people recover from measles within a few weeks, although it can be fatal in some cases.