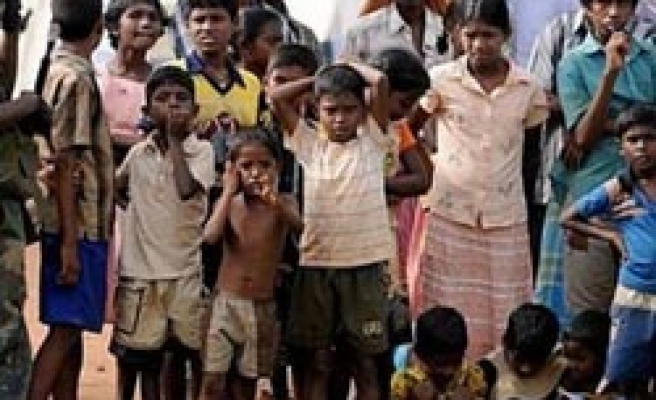 The government initially announced the ship MV Sun Sea was boarded at midday when it veered toward land, but police later said it was not boarded until evening as the ship was being guided to a naval base on Canada's Pacific coast.

Official said the ship reported it had 490 people on board and they were seeking to be declared refugees.

If confirmed to be carrying Tamil migrants, it would be the second ship in less than a year to reach Canadian shores with people from war-torn Sri Lanka making the perilous voyage across the Indian and Pacific oceans.

The Tamils on board the ship said they were fleeing persecution in Sri Lanka, but Canadian authorities suspect some on board may have links to the Tiger rebels, defeated last year after a two-decades long war.

Tents have been set up at the Esquimalt naval base near Victoria, British Columbia for immigration officials to process the passengers -- who will also be taken into police custody.

A jail near Vancouver is being prepared to hold the the migrants and hospitals in the Victoria area have been warned for people who may have taken ill on the long voyage.

Canada received 34,000 applications for refugee claims last year. Most applicants who reach Canada arrive alone or in small groups with little fanfare, and usually by air. But the boat people are thought of differently, said Peter Showler, a former chairman of the Immigration and Refugee Board.

While refugee boats rarely arrive in Canada, those that have met with a strong government reaction. "Canada has a long history of linking boats and refugees and histrionic reactions," said Showler, who now heads the Refugee Forum at the University of Ottawa's Law School.

He criticized officials for focusing on whether the ship was being operated by human smugglers instead of considering whether the passengers might be legitimate refugee claimants trying to escape persecution.

Canada's Conservative government has recently taken a harder line on law and order issues, including tougher laws against organized crime and plans to spend more than C$9 billion to build new prisons and retrofit old ones.

Sri Lanka's ambassador to Canada told interviewers on Thursday her government wanted Tamils to be rejected.

The Sri Lankan government has been at odds with the United Nations, which is investigating allegations that thousands of civilians died at the end of the war. The government denies the allegations. There are also claims the Tamil Tigers used civilians as human shields.

Tamil groups in Canada, which have rallied to help the migrants, have accused Sri Lanka of saying the migrants are linked to the Tamil Tigers in an effort to make their refugee bids more difficult.