The House of Commons passed the emergency back-to-work bill late Friday and the Senate scheduled a rare weekend session to deal with it just as the strike hit the capital, but after seven hours of debate and witness testimony pushed the vote on it to Monday. 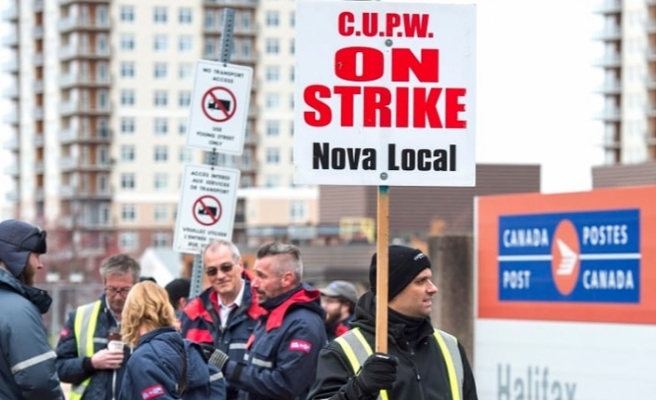 Postal service in Canada is expected to resume on Tuesday at the earliest after the government fast-tracked legislation to end five weeks of rotating strikes that threatened a disastrous holiday season for online retailers.

Once passed, the bill would take effect the following day. But with some senators expressing reservations about forcing an end to the strike, it became unclear late Saturday if the measure would pass or not.

"I had hoped we could complete the debate this weekend, but I also understand that some senators might have wanted more time to study the bill in light of the testimony from ministers, Canada Post and the Canadian Union of Postal Workers before it moves to the final stage," Senator and government representative in the Upper House Peter Harder said in a statement.

Employment Minister Patty Hajdu has signaled the two sides to continue talks in a bid to reach a negotiated labor contract before the legislation takes effect.

"They can still pull a deal off," she said Friday. "Obviously we would prefer that the parties are able to negotiate an agreement together, but the time has come that we need to be prepared to take action if they cannot."

The two sides have been in contract negotiations for nearly one year.

Rotating strikes have already affected more than 200 communities, including major cities Toronto, Montreal and Vancouver. In mid-November Canada Post asked the rest of the world to stop sending in mail because of a backlog of deliveries caused by the work stoppages.

At issue is a massive uptick in e-commerce that has been a boon to the economy but also led to a spike in workplace injuries at Canada Post due to higher parcel volumes.

Hajdu said there had been "limited progress" in talks between the union and management, and as major Black Friday and Cyber Monday sales events loomed, Ottawa faced pressure from online retailers to legislate an end to the walkout.

Canada Post delivers two-thirds of the nation's online shopping and the last six weeks of the year are its busiest due to the holiday rush.

The union representing 50,000 postal workers, however, accused the government of trampling on its collective bargaining rights.

"Without (the right to strike), an employer has no incentive to bargain in good faith, and workers have no recourse to demand a fair process," Canadian Labor Congress president Hassan Yussuff told a press conference in Ottawa.

He was flanked by Canadian Union of Postal Workers president Mike Palecek, who disputed the impact of the job action.

"The mail was moving," Palecek said. "People have been getting their mail and online orders delivered. That was the point of our rotating strike tactics, not to pick a fight with the public."

Hajdu said postal service is essential in the country which is, geographically, the world's second largest.

Notably, she said, "small businesses are being dramatically affected. And when I say 'small,' I mean really small. I mean people that sell marmalade or handmade goods."

For them, this is the most profitable time "and if they are unable to make their earnings this time of year, they very well might be facing the end of their business," the minister said.