Stewart’s breast cancer has spread into her lungs and lymph nodes, and her doctor says she has less than 18 months to live. 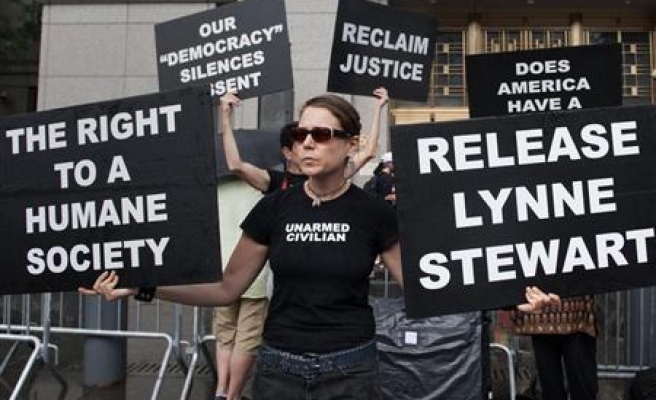 A former New York who defended a jailed Egyptian cleric lost her bid on Friday to be released from prison because she is suffering from terminal cancer.

Stewart, known for her advocacy of left-wing causes, is suffering from stage IV breast cancer and asked that her sentence be vacated or modified to time-served.

The Bureau of Prisons must agree before a court can reduce a sentence based on compassionate release, he said in court documents.

However, the judge left open the possibility that she might still have a chance at freedom, saying that in the time since the Bureau turned her down, her doctor said she has less than 18 months to live.

Stewart's attorneys have resubmitted her application with the Bureau, and it is pending, Koeltl said.

He said the court was "prepared to give prompt and sympathetic consideration" to a motion by the bureau seeking compassionate release.

In 2000, during a visit with her convicted client, Sheik Omar Abdel Rahman, he asked Stewart to release a statement from him to the press. The Clinton administration did not prosecute her for the press release.

But under the Bush administration, Attorney General John Ashcroft came to New York in April 2002 to announce that the Justice Department had indicted Stewart, a paralegal and the interpreter on grounds of "materially aiding a terrorist organization."

Stewart was sentenced to 28 months in prison, but was re-sentenced in 2010 to 10 years in prison.

Stewart was first diagnosed with breast cancer in 2005, and it returned last year, according to court documents. The cancer has spread into her lungs and lymph nodes, and she needs help bathing and suffers from the side effects of chemotherapy treatments, the documents said.