Court documents filed on Friday by defense lawyers said the suspect had been under the care of a psychiatrist, Dr. Lynne Fenton, who is on the faculty of the University of Colorado-Denver's Anschutz Medical Campus. 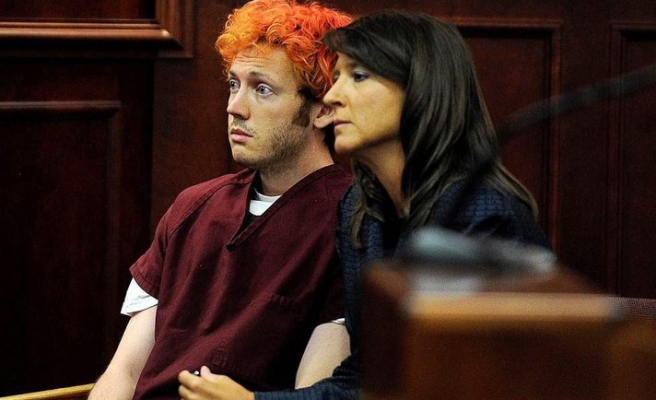 The former graduate student accused of killing 12 people in a shooting spree at a Denver-area movie house was due to make a second court appearance on Monday as prosecutors and defense lawyers sparred over a mysterious package sent to his psychiatrist.

James Holmes, 24, was arrested shortly after prosecutors say he opened fire at a packed midnight movie premiere of "A Dark Knight Rises" on July 20. Criminal charges against Holmes, who has remained jailed since his arrest, were expected to be formally presented at Monday's hearing.

He is also accused of wiring his apartment with enough explosives to have leveled the entire building had they been detonated. It took authorities several days to safely dismantle and dispose of the booby traps.

The rampage in the Denver suburb of Aurora, Colorado, ranks as one of the nation's bloodiest mass shootings in recent years. It left 12 dead and 58 injured, several critically.

Ashley Moser, the critically injured mother of the 6-year-old girl killed in the rampage, suffered a miscarriage, her family said on Saturday.

At his initial court hearing one week ago, Holmes said nothing and appeared dazed and groggy, occasionally closing his eyes as if fighting off sleep. Courtroom spectators, including relatives of some of the victims, stared intently at the defendant, his tousled hair still dyed the bright orange color it was the night of his arrest, as he stared into space.

What if anything investigators might have learned about a motive for the shooting has remained shrouded in secrecy.

Arapahoe County District Judge William Sylvester has sealed most court records and investigative documents from public scrutiny and barred anyone connected with the case from speaking to the media.

Sylvester has said he will consider a request by news media organizations to unseal documents in the case.

Holmes, a San Diego native, was a doctoral student of neuroscience at the Anschutz campus before dropping out recently.

Court documents filed on Friday by defense lawyers said the suspect had been under the care of a psychiatrist, Dr. Lynne Fenton, who is on the faculty of the University of Colorado-Denver's Anschutz Medical Campus.

The hearing on Monday will also address a package that Holmes sent to Dr. Fenton and was later seized by investigators.

The university confirmed earlier this week that a suspicious package was delivered by mail on Monday and that it was "immediately investigated and handed over to authorities within hours," but gave no further details of the parcel.

Defense attorneys are seeking a court order requiring prosecutors to immediately turn over all evidence pertaining to the seizure of a package, citing doctor-patient privilege.

"Mr. Holmes was a psychiatric patient of Dr. Fenton, and his communications with her are protected," the filing said, adding the judge should impose sanctions for leaks of privileged material.

Prosecutors urged the judge to deny the defense request, arguing that it was based on erroneous assumptions that stemmed from flawed, unconfirmed media accounts.

The prosecution's filing specifically disputed details of a Fox News report last week that two packages had been sent by Holmes to a university psychiatrist and that one contained a notebook detailing the shooting scenario, including stick-figure drawings.

Friday's defense motion provided the first definitive public inkling that Holmes was known to have suffered psychiatric problems before the shooting.

Fenton, the medical director for student mental health services at the Anschutz campus, provides medication and psychotherapy for grad students in addition to her teaching duties, according to a school website.

She is listed as a member of the campus-based "behavioral assessment and threat assessment team," which helps faculty and staff deal with "individuals who may be threatening, disruptive or otherwise problematic."

It was not immediately clear could if Fenton was caring for Holmes under the threat-assessment program or under routine counseling she provided to students on campus.

Under Colorado law, mental health professionals cannot be held liable in civil suits for failing to predict a patient's violent behavior unless it involves a "serious threat of imminent physical violence against a specific person or persons." When such a threat is made, the mental health professional is required to take action, which may include notifying those targeted or a law enforcement agency.

Fenton could not be reached for comment. A spokeswoman for the University of Colorado medical school declined to comment, citing restrictions under the judge's gag order in the case.