A heat advisory is typically issued when the heat index - a combination of temperature and humidity - exceeds 100 degrees and there is a risk of people and animals suffering heat exhaustion. 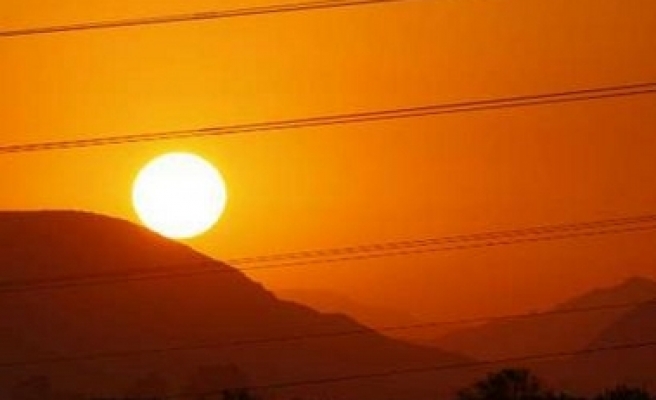 Temperatures in the triple digits were causing misery in the eastern and southern United States on Friday, with the country music capital of Nashville, Tennessee recording an all-time record of 109 degrees Fahrenheit (43 degrees Celsius).

Marked in pink on a Weather Underground map of the United States, a heat advisory spread like a rash over a third of the country, from Nebraska east to New York and south to Florida.

A heat advisory is typically issued when the heat index - a combination of temperature and humidity - exceeds 100 degrees and there is a risk of people and animals suffering heat exhaustion.

As of mid-afternoon, the mercury had hit 105 F (41 C) in Baltimore, Maryland, 108 F (42 C) in Petersburg, Virginia and 107 F (42 C) in Columbia, South Carolina, according to Accuweather.com senior meteorologist John Dlugoenski.

"We expect records to be broken from the mid-Atlantic down through the Carolinas," Dlugoenski said.

Friday's heat had spread east from the south central plains and Mid-Mississippi states, where temperatures continued to meet or break records Friday. Many areas of the country have received no break from days of high temperatures and little rain, which have contributed to deadly and destructive fires in Colorado.

The heat itself has proved deadly. Earlier in the week, a 39-year-old construction worker died at the University of Arkansas. In Kansas City, Missouri, where the temperature rose to 105 F (41 C) Thursday, city health officials said two deaths were being investigated to determine if they were heat-related.

Chicago, where a thunderstorm tamped down temperatures, got some relief from temperatures which hit 100 F (38 C) Thursday.

A strike by electrical workers could add to New Yorkers' misery. Union workers at the power company Con Edison could go on strike at midnight Saturday, when a collective bargaining agreement expires, which could leave the company shorthanded to deal with power outages as residents crank up air conditioning.

The weather is expected to stay hot through the weekend in the same areas of the country, according to Dlugoenski.

"The areas of high pressure are going to break down just a little bit as we head into the first part of next week," he said. "It will still be hot, but I think the record warmth will be more erratic."

Staying off the streets

In Washington, D.C., where the mercury reached 103 F (39 C) at Reagan National Airport at mid-afternoon, vendors of soft drinks and bottled water complained the heat and wilting humidity were keeping people inside and cutting into sales.

"This is kind of slow, for real. People aren't spending like they used to," said vendor James Hardy, wiping sweat from his face as lines of tourists passed his spot across the street from the National Museum of American History.

"I can't drink any more water," said one man as he walked by, his T-shirt wet with sweat.

Catherine Dee, 18, of Pomfret, Connecticut, stopped with friend Alana Cotto, 16, of Sandwich, Massachusetts, to buy water from a vending truck outside the museum.

"We just went to the aquarium, we thought that being around fish would cool us down for a while," said Dee, a student. "It did, and we came out and we were swamped from the heat. We weren't expecting it to be this hot."

In Missouri, Governor Jay Nixon ordered the activation of the State Emergency Operations Center in response to fires and the prolonged period of heat and drought. About 550 acres of the Mark Twain National Forest already have burned.

In Tennessee, the temperature in Nashville on Friday reached 109 degrees, smashing an all-time record high for the city of 107 degrees, reached on July 27 and July 28, 1952.

The heat is bad for business, according to John Summers, who pilots biplane tours over the Nashville area. Friday he moved one appointment to early in the day and postponed two other tour flights that were scheduled for around midday.

"It would have been uncomfortable flying around in an open-cockpit biplane," said Summers. "I'm not getting the phone calls I'd normally be getting. It's just too hot. The tourists are not going to do outside activities."

The entire state of Arkansas is in a drought, and many fireworks displays had been canceled for the week of the July 4 for fear of fire. Agriculture experts said cattle, fish and chickens through the state have died as a result of the heat.