One woman was killed when her house collapsed in the town of Cuilapa, near the epicenter of the quakes, and two others died after their cars were buried in a landslide on the highway. 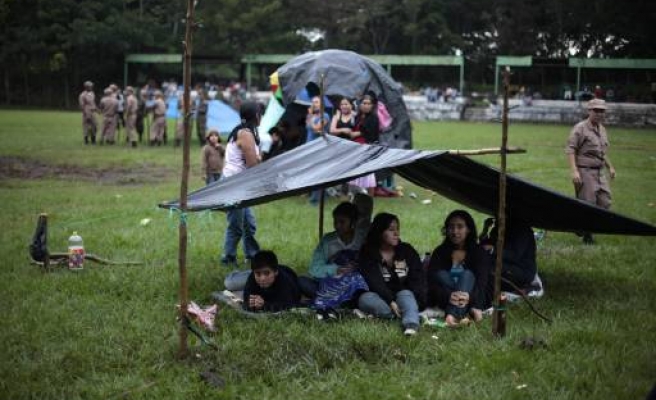 The quakes struck near Guatemala's southwestern coast in the sugar cane-growing region around Santa Rosa, forcing the evacuation of about 400 people and cutting electricity and telephone services, emergency services said.

One woman was killed when her house collapsed in the town of Cuilapa, near the epicenter of the quakes, and two others died after their cars were buried in a landslide on the highway.

"In Chiquimulilla, there's a landslide ... where vehicles fell in and were buried. There are material damages to the vehicles and two fatalities reported so far," volunteer fire brigade spokesman Mario Morales said.

Thirteen people were hospitalized and classes were canceled in the Santa Rosa region, but emergency services said they did not expect further severe aftershocks.

"It's unlikely that there will be any more events bigger than what we have already experienced," said Alejandro Maldonado, head of the country's disaster coordination agency.

"The situation is completely under control."

An initial 4.8 magnitude quake at 12 p.m. local time (1800 GMT) was followed about half an hour later by a second quake of 5.8 magnitude, the U.S. Geological Survey said. There were two smaller ones after that. The epicenters of the quakes were near Cuilapa and the largest one had a depth of 25 miles (40 km), the USGS said. They shook buildings in Guatemala City, about 33 miles (52 km) away.

The area is earthquake-prone with more than 15,000 tiny quakes since 1979, said Eddy Sanchez, the head of Guatemala's geological institute.

Many of the houses in the area around Santa Rosa are made of mud bricks and their weak structures are more vulnerable to collapse during a quake, he said.

"4.8 is a moderate magnitude for well-constructed buildings but for mud brick buildings it's very dangerous," he said.