One of the dead was the shooter, the source said, adding that there was no apparent link to terrorism. 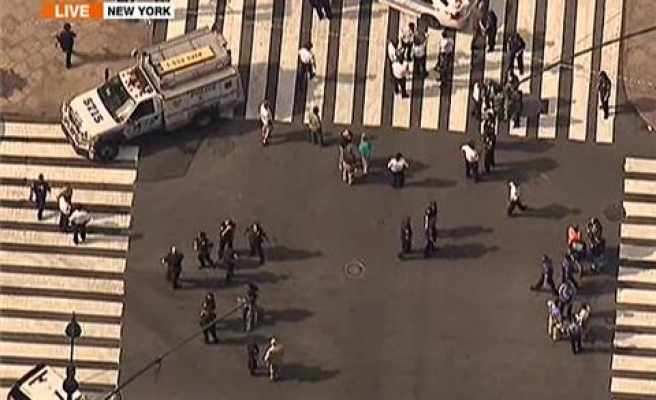 Two people were killed and at least eight were wounded in a shooting outside the landmark Empire State Building in New York City on Friday, according to a New York police source.

One of the dead was the shooter, the source said, adding that there was no apparent link to terrorism.

"I heard the gunshots," said Dahlia Anister, 33, who works at an office near the 102-story Empire State Building. "It was like pop, pop, pop. It was definitely in a bunch."

The victims were shot shortly after 9 a.m. (1300 GMT) on the sidewalk on Fifth Avenue outside the building in Midtown Manhattan.

The shooting broke out at the height of the tourist season outside one of New York City's most popular attractions, startling tourists and commuters in one of the busiest areas of the city.

The building is two blocks from Pennsylvania Station, one of New York City's main transportation hubs.

The United States has had two other mass shooting cases this summer. On July 20, James Holmes, 24, allegedly opened fire at a midnight screening of the Batman film "The Dark Knight Rises" in Aurora, Colorado, killing 12 people and wounding 58.

On Aug. 5, a gunman killed six people and critically wounded three at a Sikh temple outside Milwaukee before police shot him dead in an attack authorities treated as an act of domestic terrorism.

The Empire State Building was the world's tallest building for 40 years from its completion in 1931 until construction of the World Trade Center. Following the Sept. 11, 2001, attacks, it was again the tallest building in the city.