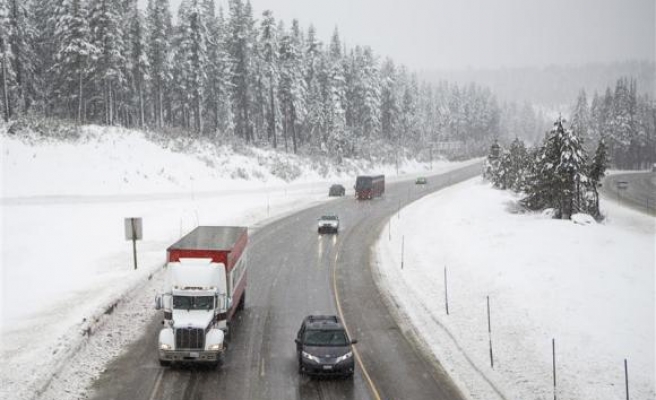 A major winter storm that has caused at least six deaths unfurled across much of the U.S. South on Tuesday, and forecasters warned that ice could cripple road travel and bring widespread power outages in coming days.

The storm's combination of rain, sleet, heavy snow and thick ice across the South is of "historical proportions," said the National Weather Service office in Peachtree City, Georgia.

"There is the potential for it to be a catastrophic event," with ice bringing down trees and power lines, said Brian Lynn, a weather service meteorologist.

The storm is forecast to reach from eastern Texas to the Carolinas and the Middle Atlantic states by late on Wednesday. Heavy snow from the front will hit southern New England by Thursday morning, the weather service said.

Conditions in the South were expected to worsen overnight, with up to an inch (2.5 cm) of ice predicted in parts of Georgia and central South Carolina.

But Dan Darbe, a weather service meteorologist, said ice was the bigger worry, with a quarter to three-quarters of an inch (0.6 to 2 cm) expected in the area that includes metropolitan Atlanta.

The storm caused two weather-related traffic deaths in Mississippi, and three in northern Texas, authorities said. A Dallas firefighter responding to an accident on an icy road also died when a skidding car hit a parked vehicle and he fell off a highway bridge.

Officials were quick to make plans for dealing with the weather after being criticized for inadequate preparation before a storm two weeks ago. That storm paralyzed Atlanta area roads and forced more than 11,000 students in Alabama to spend the night at their schools.

Hundreds of schools and offices were closed from Texas to North Carolina on Tuesday. More closures were planned for Wednesday.

"This is not the storm we had two weeks ago, where we were playing in the snow and building snowmen. This is an ice storm," South Carolina Governor Nikki Haley said.

South Carolina is expected to get up to 1.5 inches (3.8 cm) of ice over the next 48 hours. The National Guard was put on alert and shelters prepared in the state.

Pamela Maze, a 52-year-old teacher's assistant in Atlanta, made a grocery store run on Tuesday morning but said she was not worried about the possibility of an ice storm.

"When I'm at home, I'm at home and I don't have to come back out," she said. "I think everyone should take their time and be safe, be careful."

About 1,300 U.S. flights were canceled and another 3,500 delayed on Tuesday, according to flight-tracking website FlightAware.com.