Wildfires sweeping across drought-stricken Texas have destroyed more than 1,000 homes and forced thousands of evacuations in the last several days. 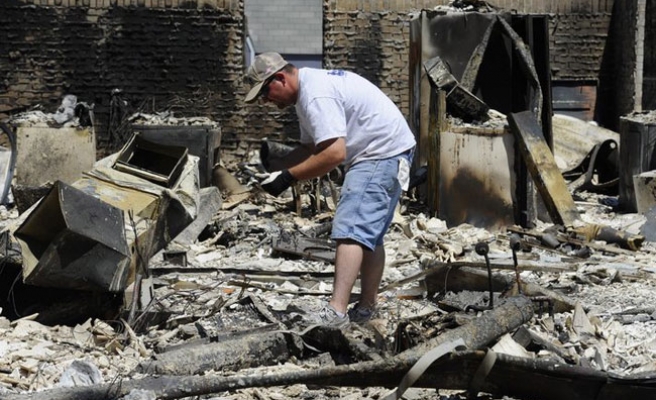 Firefighters gained ground on Wednesday for the first time against a deadly wildfire raging near Austin that has destroyed more homes than any other blaze in Texas history, officials said.

The 34,356-acre (14,000-hectare) Bastrop County Complex fire, which has forced the evacuation of 5,000 people, was about 30 percent contained. The fire has destroyed 785 homes, the Texas Forest Service reported, and killed two people.

County officials have given a lower number for homes destroyed.

Firefighters who have fought the blaze, which stretches 24 miles long (39 km) and 20 miles (32 km) wide, since Sunday have been helped in the past two days by decreased winds and cooler temperatures, officials said.

President Barack Obama spoke with Governor Rick Perry, who was in California for a Republican presidential debate, on Wednesday to discuss federal help for Texas.

Lieutenant Governor David Dewhurst visited the firefighting command center and said he would ask the federal government to declare the state a disaster area.

Wildfires sweeping across drought-stricken Texas have destroyed more than 1,000 homes and forced thousands of evacuations in the last several days.

More than 3.6 million acres (1.45 million hectares) in Texas have been scorched by wildfires since November, fed by a drought that has caused more than $5 billion in damage to the state's agricultural industry and that shows no sign of easing.

The U.S. Forest Service has sent a team to the area to help coordinate and Federal Emergency Management Agency officials were on the ground assessing damage.

Also assisting were about 100 members of Texas Task Force 1, an elite wide-area search team that will be searching the enormous fire zone, said Mike Fisher, the county's emergency management coordinator.

The team was used in New York City after the Sept. 11, 2001, attacks and after Hurricane Katrina in New Orleans.

A DC-10 air tanker capable of carrying 12,000 gallons (45,000 litres) of retardant to drop onto the flames -- four times the normal capacity for retardant bombers -- landed in Austin on Tuesday and will fly on Friday after a federally mandated break.

It had not yet been determined whether the DC-10 would be used in Bastrop or sent to other sites in Texas.

So far, four people have died in the Labor Day weekend fires, including a mother and infant daughter who died in northeast Texas on Sunday.