Death toll climbs to 59 in US mass shooting 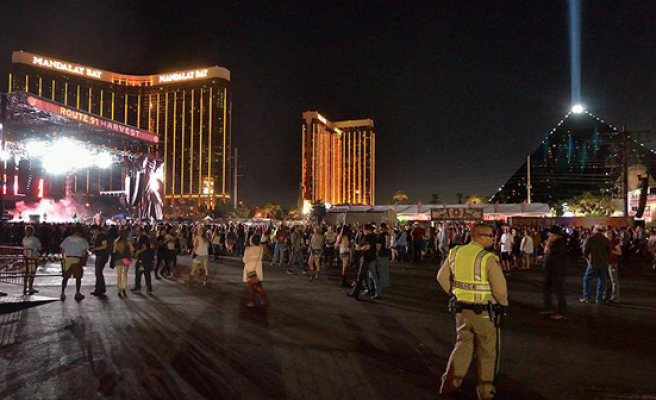 More questions remain than answers after officials said Monday a gunman killed at least 59 people in at a concert in Las Vegas.

Stephen Paddock, 64, is suspected of launching the assault at an outdoor venue across from the Mandalay Bay hotel at around 10.08 p.m. local time Sunday (0508GMT Monday), Clark County Sheriff Joseph Lombardo told reporters.

The retiree-turned-gunman is a resident of nearby Mesquite, Nevada, and has no apparent connection to terrorism, according to Lombardo who characterized the shooting as a "lone wolf" attack and Paddock a "psychopath".

The suspect’s brother struggled to make sense of the shooting while speaking to reporters in Orlando, Florida. "We're still just completely befuddled, dumbstruck," Eric Paddock said of his family's reaction to the news.

He said his brother was an accountant and a multi-millionaire real estate investor who “had nothing to do with any political organization, religious organization, no white supremacists -- nothing, as far as I know."

But the Paddock family is no stranger to crime. The brothers’ father was once on the FBI’s Most Wanted list after he escaped prison while serving time for bank robbery.

Authorities said they recovered a cache of weapons in Paddock’s room at the hotel and a separate arsenal at his home about 80 miles (130 kilometers) away.

He fired as many as 600 rounds in six or seven bursts with an automatic weapon for more than four minutes, police said, according to media reports.

Video of the shooting showed thousands of concert-goers fleeing the venue, causing stampedes as fans ran for cover.

The shooter was reportedly found dead in his room on the 32nd floor of his hotel room where he launched the attack, the sheriff said.

The normally bombastic Trump struck a much softer tone in what was his first address to the nation following such a tragedy.

"In times such as these I know we are searching for some kind of meaning in the chaos, some kind of light in the darkness. The answers do not come easy. But we can take solace knowing that even the darkest space can be brightened by a single light, and even the most terrible despair can be illuminated by a single ray of hope," he said.

But the White House backed away from calling the attack domestic terrorism, instead urging patience for the facts of the shooting to be revealed.

Flags across the U.S. were lowered to half-staff in a sign of mourning and Trump will visit Las Vegas on Wednesday.

Turkey’s President Recep Tayyip Erdogan led a chorus of Turkish officials who took to Twitter to denounce the attack and offer solidarity with the U.S.

"I condemn in the strongest terms possible today's terror attack in Las Vegas, NV," Erdogan wrote. "I sincerely hope that such attacks won't happen in the future. On behalf of the Turkish people, I offer my condolences to the families and loved ones of the victims and all Americans."

American pop star Ariana Grande, whose concert in the U.K. was also attacked in an act of terrorism that killed at least 22 people in May, called for gun control after the Las Vegas shooting.

"My heart is breaking for Las Vegas," she wrote on Twitter. "We need love, unity, peace, gun control & for people to look at this & call this what it is = terrorism."

Meanwhile, Pope Francis expressed his “spiritual closeness” to victims, while he called the attack a "senseless tragedy."

Daesh claimed responsibility for the attack via its Amaq News Agency, and said Paddock was a recent convert to Islam.

But the FBI rejected the claim and said there was no evidence to support it.