Demonstrations resume in Missouri over shooting death of black teen

The protesters, who called for Wilson's arrest and the removal of Ferguson police leaders, were blocked from walking up the courthouse steps by a group of officers 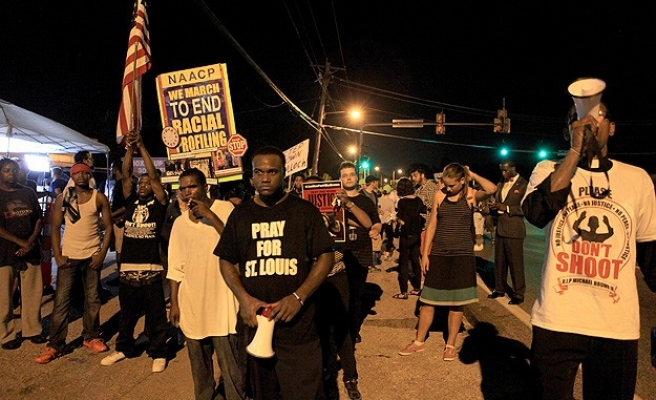 More than 100 demonstrators marched peacefully in St. Louis on Tuesday demanding the arrest of a white police officer who shot and killed an unarmed black teenager in Ferguson, Missouri, almost three weeks ago.

By nightfall, a small group of about 30 people marched in Ferguson along the street that has been the center of protests since the death of Michael Brown, 18, although the atmosphere was subdued and police presence was limited.

Brown's death focused global attention on the state of race relations in the United States and evoked memories of other racially charged cases, including the fatal shooting of Trayvon Martin, a 17-year-old African-American, in Florida in 2012.

Family and supporters of Brown celebrated his life on Monday at a music-filled funeral service at a St. Louis church that rang with calls for peace and police reforms.

The Aug. 9 shooting sparked two weeks of demonstrations, some with violent clashes and scores of arrests, in which protesters demanded Ferguson Police Officer Darren Wilson be charged in Brown's death.

Demonstrations have been more subdued in recent days.

On Tuesday afternoon, demonstrators marched a few blocks from St. Louis City Hall to the federal court building, chanting: "Fired up, fed up, time that we stand up."

The protesters, who called for Wilson's arrest and the removal of Ferguson police leaders, were blocked from walking up the courthouse steps by a group of officers, most on bicycles.

U.S. Attorney Richard Callahan from the Eastern District of Missouri met five of the protesters, who were allowed to enter the courthouse, and heard their demands for policing reforms and justice for Brown.

"Just the fact that he agreed to meet with us means he is taking this seriously," said Montague Simmons, a member of the Organization for Black Struggle, who attended the meeting.

There have been differing accounts of the shooting.

Police have said Brown struggled with Wilson, who shot and killed him. However, some witnesses say Brown held up his hands and was surrendering when he was shot multiple times in the head and chest.

A St. Louis County grand jury has begun hearing evidence and the U.S. Justice Department has opened its own investigation.

Despite continuing protests, the scene was peaceful and relatively calm as temperatures cooled to about 84 degrees Fahrenheit (29 Celsius) on Tuesday night after reaching 97F (36C) in mid-afternoon. Lightning flashed in the distance but a brief rain shower had passed.

Smalls groups also gathered earlier on Tuesday at the memorial in Ferguson, where the majority of residents are black and most elected officials and police are white.

"This community has had a story to tell for a long time and this has just been the catalyst," said Chelsea Warlick, 29, a photographer from Savannah, Georgia.

Warlick, who laid white roses by the memorial, said she was about to sign a six-month lease on an apartment in the complex where Brown lived to support the community.

"The verdict is everything. If he doesn't go to jail for what he did, this place is going to burn," she said of Wilson.