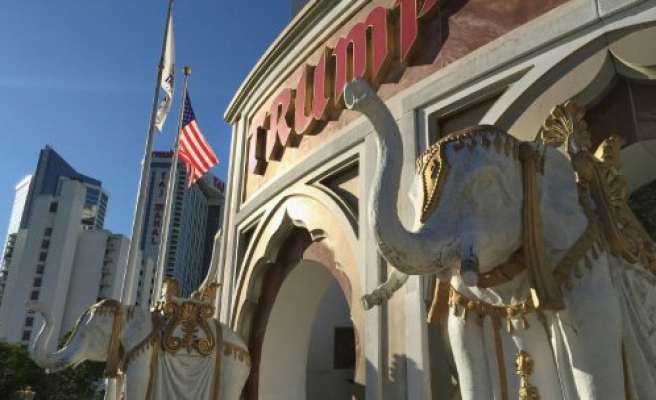 Con Kimura got the best Christmas bonus of his life working for Donald Trump in Atlantic City in 1984. But he still won't vote for him as president.

"Never in a million years," the emphatic 64-year-old retiree told AFP, standing outside the shuttered casino where he worked 30 years ago on the city's famed boardwalk, as a cold wind whipped off the Ocean.When Kimura was a casino floor supervisor at Trump Plaza from 1984-88, the celebrity New York billionaire was a hero in the New Jersey coastal resort.

The flashy tycoon invested heavily, bringing glitz and glamor -- encouraging tourism after the city legalized gaming in a bid to rescue a sagging economy.

He employed thousands of people. Three of his casinos, Trump Plaza, Trump Castle and the Taj Mahal contracted local businesses to provide services as diverse as liquor, laundry and limousines.

Michael Jackson came to the opening of the Taj in 1990. "Baywatch" beauty Pamela Anderson visited. Mike Tyson boxed his way to victory.

"Being Donald Trump at the time was probably a better gig than being president of the United States," recalls Kimura. "People loved him."

But then things collapsed.

The Taj -- the gaudy construct that late author Harper Lee likened to hell on Earth -- went bankrupt in 1991, a year after opening.

The Plaza followed in 1992. Trump Hotels and Casino Resorts filed for bankruptcy in 2004, as did Trump Entertainment Resorts in 2009.

On the campaign trail, the Republican frontrunner downplays the four corporate bankruptcies as restructuring that did not hurt "nice, sweet little people."

But in a series of interviews with AFP, critics in the largely Democrat town beg to differ. The lesson of their brush with Trump, they say, is: Don't believe him -- he won't deliver what he promises.

It has been years since Trump held any stake in Atlantic City and he boasts of quitting before the city fell into serious recession as other gaming destinations cropped up across the East Coast.

"That's simply not close to the truth," says Steven Perskie, a former judge who wrote the legislation that legalized gaming in Atlantic City and who was chairman of the Casino Control Commission from 1990-94.

"While they were legally entitled to do what they did," said Perskie, "the devastating impact that their decisions had on so many other people and so many other small businesses in this area have never been acknowledged."

When Trump first invested in Atlantic City he told regulators he would never rely on junk bonds as others had done. "Well he did," said Perskie.

"He never invested 10 cents of his own money in any of this," he recalls. "He borrowed it all and he borrowed it under circumstances that... were creating an intolerable risk."

It wasn't just investors who lost millions. Local suppliers went to the wall. Many went out of business or took years to recover, Perskie said.

In 1997 he joined a private law firm, hired by Trump, but which severed ties with the mogul when bills went unpaid for a year or two.

Michael Diehl, 88, was another who got burnt. Since setting up his Freehold Music Center in 1951, he says only one corporate customer ever defaulted -- Trump -- on a $100,000 check for eight Yamaha pianos for the Taj.

When Diehl chased after his payment, he was fobbed off with "all kinds of reasons" until a letter offered 70 percent on the dollar, or 10 cents to the dollar if the casino went bankrupt.

"I had no other choice but accept the 70 percent," Diehl told AFP.

He considers it a telling insight into the would-be president: "He just doesn't care."

"He puts the financial problem on the small guys: the carpenters, the plumbers, the brick layers... they are the ones who lost."

Trump Plaza is now a white elephant. It closed in 2014. The entrance from the Boardwalk has been fenced off. His name has been scrubbed from the building.

"He's not my candidate," said Frank Halfhide, who gives tourists cart rides along the boardwalk. In the off season, he says he's lucky to make $10 a day.

Disillusioned, he says he won't vote this year.

Despite flinging insults and ensnaring himself in controversy, the billionaire still heads the Republican polls, buoyed by a white, blue collar support base fed up with political elites and struggling to make ends meet.

"How bad can he be? He lost millions, and came back and made billions!" said Joe Angerson, 70, who has driven busloads of tourists to Atlantic City for 25 years. "I believe in the guy, I really do."

A Democrat, he is voting Republican for the first time and has commissioned a sign to put in his yard: "Get off your rump, let's get out of the slump and vote for Trump."

But the message from Kimura and others is don't believe it.

"My friends just think it's sort of a big joke," Kimura said. "How could someone from this area, who saw all that Donald Trump did, ever vote for him?"