As a large Category 4 storm on the five-step Saffir-Simpson scale, Earl had been the largest hurricane to threaten the densely populated U.S. Atlantic shoreline since Hurricane Bob in 1991. 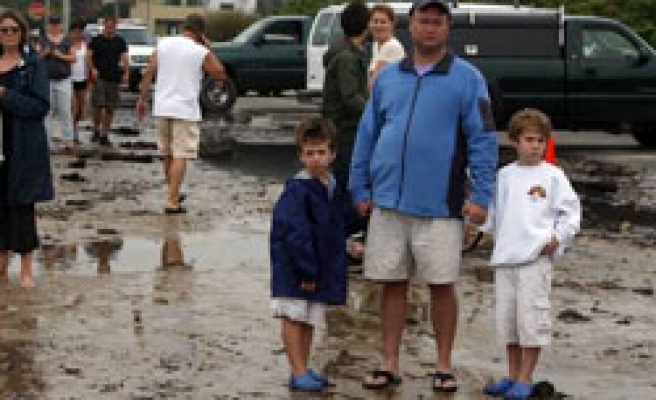 Hurricane Earl made landfall in Canada on Saturday and fizzled after a series of scares along the U.S. East Coast, flooding roads, felling trees and cutting power to tens of thousands in the Atlantic province of Nova Scotia.

One man died in the Halifax region after he swam into rough waters to secure a boat that had come loose from its mooring. He drowned while attempting to swim back to shore.

But the storm, downgraded successively from a fierce Category 4 hurricane, never packed the punch that had been feared earlier in the week, when experts warned of possible widespread damage in a region that includes some 1.1 million barrels per day of U.S. oil refining capacity.

"We dodged a bullet here," Scott MacLeod, a spokesman for the Massachusetts Emergency Management Agency, said of Earl's charge past Massachusetts as a tropical storm. "Other than some minor road closures due to localized flooding, we're not getting a lot of reports of major damage."

The storm was again a hurricane, but barely, when it reached Canada. It quickly weakened again to a tropical storm, with wind speeds under 74 mph (119 kph), half of the wind speed of a violent Category 4 hurricane.

The storm, with initial gusts of 80 mph (130 kph), cut power to 200,000 homes and business across the province of some 940,000. The Nova Scotia power authority said it could be two days before full power is restored.

As a large Category 4 storm on the five-step Saffir-Simpson scale, Earl had been the largest hurricane to threaten the densely populated U.S. Atlantic shoreline since Hurricane Bob in 1991.

It delivered heavy rain and gusty winds to parts of the eastern United States en route to Canada, but the storm stayed mostly offshore and caused far less damage than feared on its path up the U.S. coast from North Carolina. It hit land in Nova Scotia, on the Atlantic coast.

In the provincial capital Halifax, powerful winds churned up the harbor and tossed litter through downtown streets as blacked-out traffic lights swayed alarmingly. It was hard to stand against the swirling, gusting wind.

Earl deposited about an inch (2.5 cm) of rain per hour as it crossed Nova Scotia and moved into the neighboring maritime provinces of New Brunswick and Prince Edward Island.

The refinery is one of three in Eastern Canada, and the closest one to the center of the storm.

EnCana Corp evacuated staff from its Deep Panuke prospect off the Nova Scotia coast after suspending drilling late on Monday. The company said it would know later on Saturday when they could return.

The relatively light impact in the United States raised hopes that the Northeast will suffer only limited losses during the three-day Labor Day weekend, traditionally viewed as the final surge of summer tourist dollars for airlines and other businesses.

Storm-related outages from North Carolina to Connecticut knocked out power to about 3,300 customers, the U.S. Energy Department said -- a small number that showed the mild impact of what had once shaped up to be a monster storm.

"I think right now the biggest thing we are dealing with in terms of aftermath are downed trees and power lines," said Krista Higdon, a spokeswoman for the Nova Scotia Emergency Management Office.

By late afternoon, the U.S. National Hurricane Center described Earl as a tropical storm with maximum wind speeds of 70 mph (110 kph). It said Earl was located about 20 miles (45 km) west-northwest of the Magdalen Islands, Quebec, and was moving north-northeast at a speed of 40 mph (65 kph).