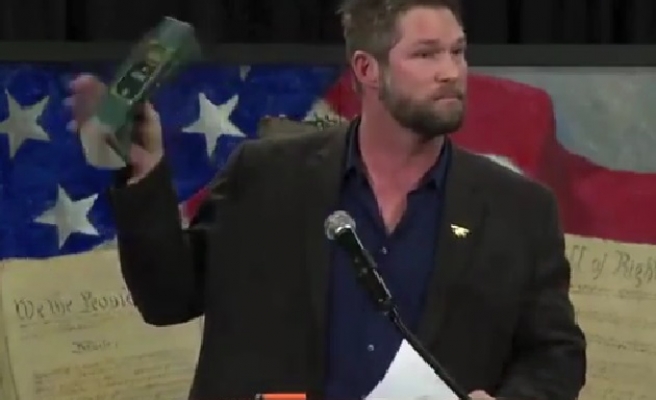 Former US Navy Seal soldier Ben Smith has appeared in a video on YouTube in which he throws the Qur’an on the floor and accuses US President Barack Obama of being an Al-Qaeda affiliate.

Speaking at a Tea Party meeting, the far-right propagandist insisted that the US President Barack Obama and his administration were undercover Marxists who were funding Al-Qaeda, the Muslim Brotherhood and the Arab Spring to form an Islamic caliphate in the Middle-East.

He then threw the Qur’an on the ground, which was met with a round of applause from the audience.

Saying that Obama bows to the Saudi king and cooperates with Iran, Ben Smith accused the Obama administration of being guilty of treason.

Ben Smith also went on to incriminate all Muslims as people who ‘pray five times a day with all of their soul that the world goes to Islam by conducting jihad,’ comparing them to Nazis.

Since leaving the army, Ben Smith has been traveling the country to speak at Tea Party meetings.

The Tea Party is an ultra-conservative movement in the US with close ties to pro-Israeli lobby groups.

I Am A muslim and i find this offensive.. keep our Holy Book out of your friggin political agendas

I find it offensive to behead ppl because they do not serve the same God muslims serve!

The truth is Ben Smith is not a "far right propagandist" but is a US Citizen exercising his God given rioght to Free Speech. The author is the real propagandist for throwing names at an American hero.The truth is the Tea Party is a grass roots movement made up of Americans who believe in the Constitution and the rule of law, unlike Ovomit who rules by decree violating laws by treasonous acts for which he should be executed.

Yes, I agree with Waqas. Ben Smith should not have simply dropped the koran, he should have burned it which is how all korans deserve to be treated. Muslims want respect but all they do is attack and murder non-muslims, so why should anyone give them respect.When muslims stop murdering non-muslims, stop destroying religious churches and temples, stop fomenting wars, and stop calling for the overthrow of governments, then we can consider giving them respect. Otherwise, islam should disappear.