Armed with brooms and trash bags, a small group of people tried to enter the area where businesses were damaged, but officers turned them back. 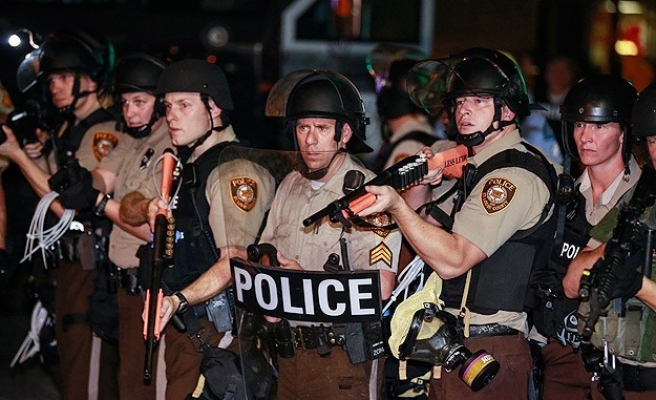 Police on Friday blocked a cleanup brigade from entering a thoroughfare in Ferguson, Missouri, where businesses were damaged in this week's racially charged rioting, as protests erupted outside retail stores in New York and other cities on one of the busiest shopping days of the year.

Ferguson's West Florissant Avenue is home to a Walgreen Co store and other stores that were looted or burned on Monday after a decision by a grand jury not to indict a white police officer in the August shooting death of an unarmed black teenager.

Armed with brooms and trash bags, a small group of people tried to enter the area, which has been closed to traffic since Monday, but officers turned them back.

"There are businesses and people sectioned off from the rest of Ferguson," said Lou Bailey, 37, a project manager who joined the effort in the city of about 21,000 people, where most residents are black but almost all the political leaders and police are white. "We need to get in there and clean up."

The grand jury's decision on Monday not to charge Officer Darren Wilson in the shooting death of Michael Brown sparked violent protests in Ferguson, which became the focal point of a national debate on race relations after the Aug. 9 incident. Sympathy protests were staged in scores of other cities.

The U.S. Justice Department is investigating the case for possible civil rights abuses, and President Barack Obama has called for reflection on the difficulties faced by minorities in the United States.

On Friday, the day after Thanksgiving, Ferguson was peaceful for a second day in a row, after more than 100 arrests earlier in the week.

Even though West Florissant Avenue remained a no-go zone, cleanup efforts were picking up steam, with locals painting murals on the boarded-up windows of stores near police headquarters, the scene of the worst violence earlier in the week. Burned-out cars at one car dealership on West Florissant were loaded onto the back of flatbed trucks.

In New York, over 100 protesters rallied in front of Macy's flagship store on Herald Square as shoppers streamed into the department store for Black Friday, the traditional opening of the holiday shopping season. Many shoppers snapped pictures of the rally with their cell phones.

Some of the protesters blocked traffic for a few minutes but quickly retreated. A small group stormed into the ground floor of Macy's, carrying placards with such slogans as "Black lives matter" and "Ferguson Is Resistance," but they left quickly.

A New York police spokesman reported no arrests as of 2 p.m.

There were also reports of more protests planned in cities such as Chicago, Los Angeles and Washington, D.C.

Back in the St. Louis area, the mayor of Dellwood, a town that neighbors Ferguson, held a press conference in which he called for state and federal aid for his city, where 13 businesses were burned on Monday and five were looted, he said.

"I am asking that Dellwood not be forgotten," Mayor Reggie Jones said. "I am asking for any resources possible to help us rebuild."

The National Guard had closed off a large parking lot in front of a Walmart store just north of Ferguson Thursday night, as authorities anticipated demonstrations on Black Friday.

Afterward, the store opened but decided to cancel Black Friday sales, and merchandise was moved to other locations in the St. Louis area, employees said. About five protesters later marched through the store shouting slogans.

Inside another Walmart store in the nearby suburb of St. Charles, about 75 protesters marched peacefully on Thursday to the bemusement of bargain-hunters pushing shopping carts brimming with goods. The group dispersed peacefully after police ordered them to go home.