Protesters closed one of the most famous streets in Washington downton to traffic, marching against Ferguson grand jury decision. 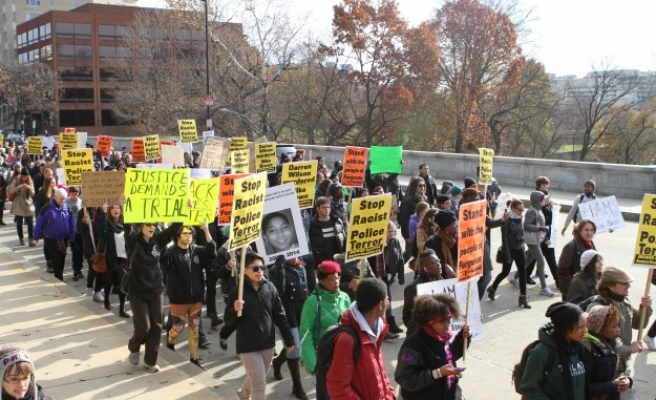 Hundreds of people shut down Georgetown streets in Washington in solidarity with protests erupted after a grand jury in Ferguson, Missouri, declined to indict a white police officer for fatally shooting an 18-year old unarmed black teen.

A group gathered at the Foggy Bottom metro station walked down to the M Street in Georgetown, one of the most famous streets in Washington downton for its brand mark stores and cafes.

Chanting slogans "no justice no peace," "black voices must be heard," "police everywhere, justice no where," the group protested "militarization" of the U.S. police and police violence against colored civilians in the country.

Jasmina Maraghba, 27, said they gathered in solidarity with the people protesting the Ferguson Grand Jury decision not to indict Darren Wilson for killing Michael Brown.

"We are here to protest racist policing which has become a habit in the United States," she told The Anadolu Agency.

The group walked down to Georgetown under tight security measures. A few people passing by the group yelled at the protesters for shuting down the district but the police officers immediately took them away from the protest area.

"We are here because we are sick and tired of killings of black people here in the United States, which happens every 24 hours, by the police and security officers," said Ken Junior, one of the oranizers of the protest.

Solidarity for Rabaa massacre in Egypt

There some among the group who showed solidarity with the protests against a July 2013 military takeover in Egypt that toppled president Mohamed Morsi from power.

They flashed Rabaa sign, a hand gesture made by raising four fingers of any hand and folding the thumb. The Rabaa sign became a symbol of the violent dispersal of two pro-Morsi sit-in protests Rabaa Al-Adawiya and Al-Nahda squares in August 2013 that at least killed 1,150 people, according a Human Rights Watch report.

"We are against injustice no matter where it is, in Egypt, in Syria, in Palestine," Khathica Mohammad, a 17-year old Egyptian-American, told The Anadolu Agency.

She was wearing a t-shirt showing a picture of an Egyptian-American man who went to hunger strike protesting the military coup in Egypt last year.

He has been in coma in a hospital in the U.S., Mohammad said, adding that she was there to show solidarity with him too.

The protesters returned back to the metro station and the protests faded there without any incident.