Ferguson teen was 'shot in back' while running away

New eye-witness accounts say Michael Brown was first shot in the back as he was escaping and then shot in the head without warning as he had his hands up 30 seconds later. 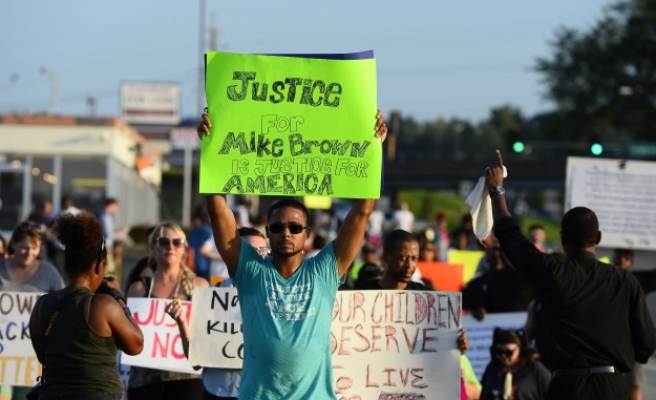 A video filmed shortly after 18-year-old Michael Brown was shot dead by US police officer Darren Wilson in Ferguson, Missouri last month shows eye-witnesses of the incident protesting against the police, saying that the victim had his hands up.

The video, obtained and aired by CNN, shows the reaction of two construction workers shouting at police from a distance, insisting that the black teen was indeed in the surrender position when he was shot, corresponding to other eye-witness testimonies.

Speaking to CNN, one of the men in the video said Brown had been shot in the head without warning while his hands were up, while the other man said Brown was originally shot in the back as he was being chased, which contradict reports that Brown assaulted Wilson during a struggle.A period of 30 seconds is believed to have passed between the two shots.

Benjamin Crump, the lawyer for the Brown family, said the video was "the best evidence you can have other than a video of the actual shooting itself," while Washington University law professor Peter Joy said the footage would likely be admissible evidence before the grand jury.

"The thing that strikes me is we actually have a film of what's going on and while it's hard to hear the construction workers say what they're saying, you have one construction worker putting his hands up in the air, which appears to be him demonstrating what he's seeing," Joy said.

Ferguson's mainly African-American community have been angered by the incident which took place on August 9.

The incident brought to light the issue of police brutality in the US, which particularly targets the African-American community.

During the weeks of protesting against police brutality in Ferguson, the media caught incidents of further heavy-handed tactics used by security forces, including the calling in of the National Guard.

Many journalists also reported being harrassed and arrested by police officers while trying to cover the events.

One amatuer cameraman also caught the shooting dead of another black resident by police in Ferguson just days after the original incident.

The video, which was shared on social media, shows police officers handcuffing the body of the victim after he had already been shot dead.