The deaths in New York were blamed on brutal thunder snow that has battered parts of the U.S. east coast since last weekend. 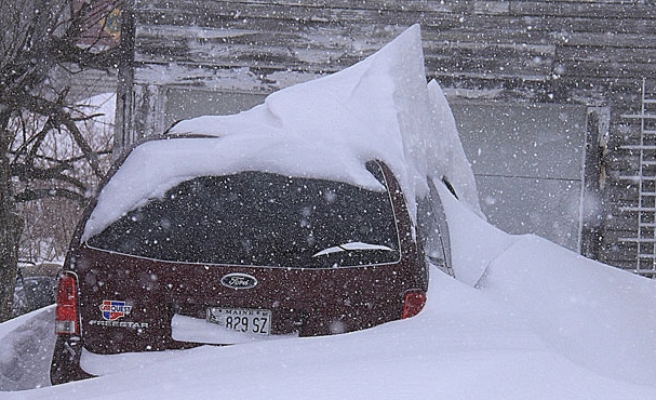 An autumn blizzard dumped a year's worth of snow in three days on Western New York state, where five people died and residents, some stranded overnight in cars, braced for another pummeling expected later on Wednesday.

Winter-hardy Buffalo and the surrounding area was pummeled by the storm that dumped 5 feet (1.5 m) of snow before breaking briefly for a sunny but frigid morning, said Deputy Erie County Executive Richard Tobe.

The next wave was expected to arrive by nightfall on Wednesday and dump another 3 feet (1 m) of snow, he said.

"That's a year's worth of snow," said Tobe, noting a state of emergency remained in effect for the area, where driving was banned on many roads and a 140-mile (225-km) stretch of the New York State Thruway along Lake Erie and Lake Ontario was closed.

Five deaths were tied to the storm, the latest a 46-year-old man was found in his car buried under about 15 feet (4.6 m) of snow, Tobe said. One person was killed in a traffic accident and three others who died after suffering heart problems.

Temperatures in all 50 U.S. states dipped to freezing or below on Tuesday as an unseasonably cold blast of weather moved across the country.

Every U.S. state, including Hawaii, was bitten by temperatures at the freezing point of 32 degrees F (0 C) or below on Tuesday, making it the coldest November morning nationwide since 1976.

Typically, such cold is not seen until late December through February, according to the National Weather Service (NWS).

As of Wednesday, parts of Erie County, western New York, had 60 inches (1.5 m) of snow, with more falling, said Steven Welch, a meteorologist with the NWS near Buffalo.

In the U.S. South, states were bracing for a record chill from the Arctic-born cold that swept the Rocky Mountains last week.

"I can't stand it," said Robin Roy, 53, shivering underneath a rainbow-colored poncho at an outdoor market in Gulfport, Florida. "I've never liked the cold."