Four years after recession, many in U.S. still fight hunger

20 percent of American adults have trouble affording food, more Americans could struggle in future, according to a recent poll 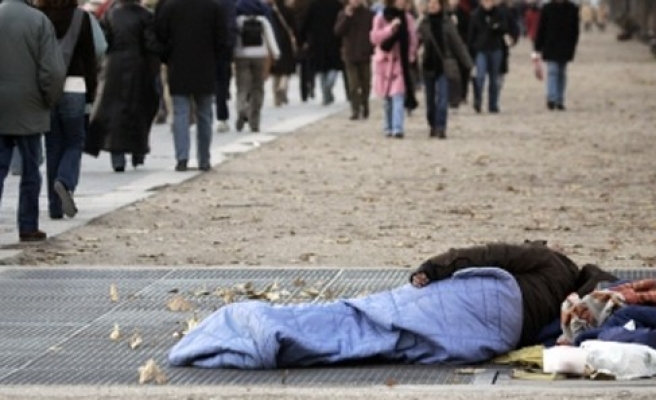 Four years after the recession ended, one in five American adults are still struggling to buy enough food, according to a survey released on Thursday that underscored the unevenness of the U.S. economic recovery.

Twenty percent of U.S. adults polled last month said that at times in the past year they had not had enough money to buy food for themselves or their family, according to Gallup's findings.

That's nearly as many hungry Americans as in 2008, when the nation was submerged in its deepest economic slump since the Great Depression nearly 80 years earlier, the national polling firm said.

"These findings suggest that the economic recovery may be disproportionately benefiting upper-income Americans rather than those who are struggling to fulfil their basic needs," it said.

With the future of the nation's food-stamp program in doubt in Congress and continuing stagnant wages for U.S. workers, "It is possible that even more Americans may struggle to afford food in the immediate future," Gallup added.

Gallup found that Americans' overall access to basic necessities such as food, housing and healthcare in August continued at the near record lows that emerged during the 2007-2009 recession.

The survey comes ahead of the annual measure of income and poverty from the U.S. Census Bureau to be released on Sept. 19.

Last week, the government's annual "Food Security" report found that 14.5 percent of American households, or 17.6 million families, "had difficulty at some time" in getting enough to eat during 2012, meaning they ran out of food, didn't have money to buy enough food, skipped meals or lost weight for lack of food.

That official food insecurity rate was essentially unchanged since 2008, when the recession and rising unemployment drove up the number of people short of food, the report from the Agriculture Department showed.

Against this backdrop, a federal program aimed at helping Americans stave off hunger has become a political hostage in Washington, where lawmakers are dueling over funding for the food stamp effort amid a wider farm bill and a larger effort to pass a government budget.

The Republican-led House of Representatives has vowed to cut $40 billion from the program, formally named Supplemental Nutrition Assistance Program (SNAP), an effort condemned by Democrats, who control the Senate.

Negotiations over the farm bill and food stamps, the largest U.S. anti-hunger program, could begin as soon as this month.

At latest count, nearly 48 million Americans, or 15 percent of the population of 314 million, received food stamps, according to USDA.

Gallup said it was likely that a variety of factors, including depressed wages, were to blame for hunger. But it added, "increasing wages alone, however, is not enough to significantly increase the percentage of Americans who have the ability to afford food."

Average hourly earnings bounced back in August after weak readings in July, according to recent U.S. data that suggested the economy was struggling to regain momentum.

The findings, which have a margin-of-error rate between 0.6 and 0.8 percentage points, were drawn from Gallup's monthly well-being telephone survey of nearly 16,000 U.S. adults in August.