Funeral for US police officer attended by thousands

More than 25,000 police officers gathered at funeral for Rafael Ramos, one of the two officers slain while sitting in their patrol car 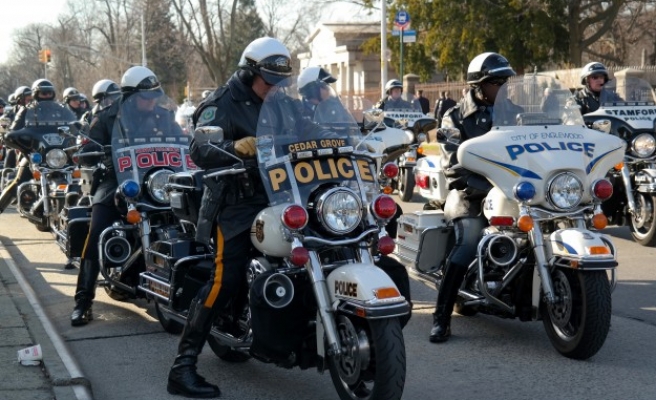 Thousands of police officers from across the United States attended the funeral of New York police officer Rafael Ramos, one of the two officers shot and killed last week while sitting in their patrol car.

More than 25,000 uniformed police officers stood outside of the Christ Tabernacle Church in the borough of Queens, where the ceremony was broadcast on a large video monitor.

"When an assassin's bullet targeted two officers, it targeted this city and it touched the soul of the entire nation," Biden told the congregation.

Officers Ramos, 40, and Wenjian Liu, 32, were shot at point-blank range by a black gunman while they were sitting in their marked police car in Brooklyn.

The shooting came after weeks of anti-police brutality protests over fatal encounters between white police officers and unarmed black men this year.

The suspect, identified as Ismaaiyl Brinsley, killed himself at a subway station minutes after the shooting, and had posted angry social media messages against the New York Police Department.

"I believe that this great police force of this incredibly diverse city can and will show the nation how to bridge any divide," Biden said.

Mayor Bill de Blasio said: “All of this city is grieving and grieving for so many reasons, but the most personal is we’ve lost such a good man and a family is in such pain.”

Police officers outside of the church were seen turning their backs to the screen as he spoke at the funeral.

The rift between de Blasio and the police stems from his support for New Yorkers who have been protesting a grand jury decision not to file criminal charges against a white police officer who in July killed an unarmed black man with a fatal chokehold. Some have accused him of feeding anti-police sentiments in society.

New York City Police Commissioner Bill Bratton announced that the officers Ramos and Liu were posthumously promoted to the rank of first-grade detective.