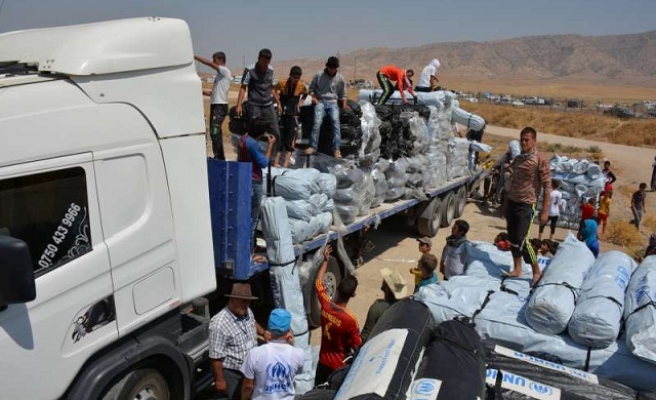 The commitment came after UN Secretary-General Ban Ki-moon told world leaders at the opening of the General Assembly debate that UN humanitarian agencies were "broke."

"We have agreed to provide together $1.8 billion for the international aid organizations of the United Nations, especially the UN refugee agency and the World Food Program," German Foreign Minister Frank-Walter Steinmeier told reporters.

The pledge was announced after a meeting of foreign ministers of the G7 -- Britain, Canada, France, Germany, Italy, Japan and the United States -- with their counterparts from Kuwait, Qatar, Saudi Arabia, the United Arab Emirates and other European ministers.

The United Nations is struggling to help some 60 million people displaced by conflict, the highest number since the end of World War II.

Four million have fled the war in Syria, with hundreds of thousands traveling to Europe to try to rebuild their lives.

The war in Syria and Europe's migration crisis will take center stage at the United Nations on Wednesday, as world leaders seek to overcome deep divisions over how to address the turmoil.

Russia will chair a Security Council meeting on terrorist threats that is expected to focus on the crisis in Syria.

Ban will separately host a meeting on Europe's migration crisis aimed at agreeing on a global response.

"We are financially broke," he said, adding that UN agencies were unable to provide the "bare minimum" for refugees in countries neighboring Syria.

UN appeals for Iraq, South Sudan and Yemen have received about half of the funds needed and only a third of the money requested for Syria.

The United Nations is asking for a record $20 billion to meet this year's needs -- six times the level of a decade ago.