Gates: US reason for Iraq war to always be 'clouded'

U.S. Defense Secretary Gates said the war in Iraq would remain clouded, implying the mistaken belief on mass destruction arms that has been never found. 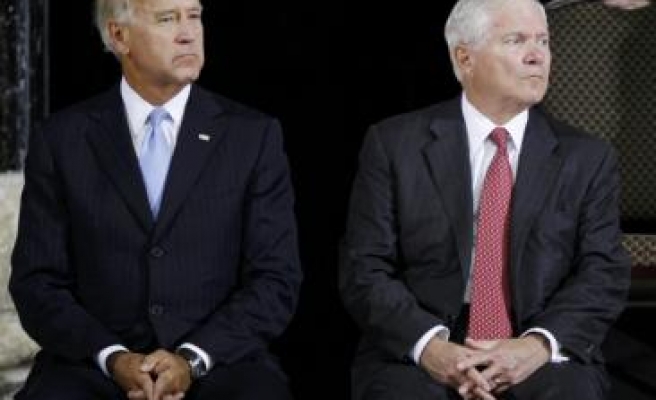 U.S. Defense Secretary Robert Gates said the war in Iraq would remain clouded, implying the mistaken belief on presence of mass destruction weapons that has been never found.

"The problem with this war, I think, for many Americans, is that the premise on which we justified going to war turned out not to be valid," Gates told reporters.

President Bush launched the war in 2003 over suspicions that Iraq possessed weapons of mass destruction. Such weapons were never found.

Almost a trillion dollars have been spent and more than 4,400 US soldiers and at least 100,000 Iraqi civilians killed since the invasion.

Gates, accompanying Vice President Joe Biden, said the war would always be clouded by the fact its unproved reason -- the hunt for Saddam's weapons of mass destruction that has been never found-- did not turn out to be valid.

But he also said that outcome of war is a good one from the standpoint of the United States.

End of US attacks

Asked by a reporter if the United States was still at war in Iraq, Gates said: "No, I would say we're not.

"Combat operations have ceased. We're still going to work with the Iraqis on counter-terrorism. We're still doing a lot of training. And advising and assisting ... So I would say that we have moved into the final phase of our engagement in Iraq."

Gates and Biden were in Iraq for a ceremony at which the U.S. military's outgoing commander, General Raymond Odierno, handed over to Lieutenant General Lloyd Austin.

Tuesday marked the formal end of the combat mission launched by President Barack Obama's predecessor, George W. Bush. Obama, who had promised U.S. voters he would end the unpopular war, said in an address from the Oval Office that it was "time to turn the page" on Iraq.

Around 50,000 U.S. soldiers will stay in Iraq up to a full withdrawal by end-2011 agreed in a bilateral security pact. They are supposed to advise and assist Iraqi forces.

The number of civilians killed by violence in August -- 295 according to the Health Ministry -- actually fell from the month before, and also compared to August last year.

But casualties were high among the Iraqi security forces who were targeted by anti-invasion groups.

A total of 54 soldiers and 77 police were killed in attacks in August, the defence and interior ministries said.

Odierno said he was confident the Iraqi security forces could protect the country.