Homeless man charged with arson at US Islamic center 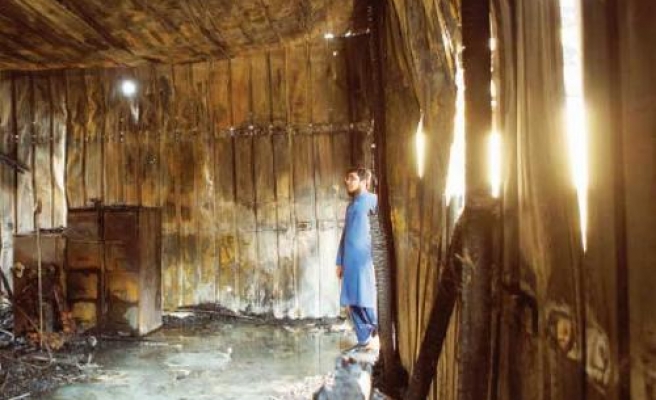 World Bulletin / News Desk
A homeless man has been arrested and charged with arson that destroyed a building at an Islamic center in the U.S. state of Texas, local authorities said Tuesday.

Darryl D. Ferguson, 56, is accused of starting the Feb. 13 fire "by igniting a flammable liquid with the intent to destroy and damage" a building owned by the Quba Islamic Institute in Houston, according to court documents obtained by The Anadolu Agency.

The fire came as the American Muslim community remained on edge following the Feb. 10 murder of three young Muslim students in North Carolina that prompted widespread concerns that the violence was perpetrated against the victims because of their religion.

Ferguson, who is reported to be homeless, admitted to starting the fire, a spokesman for Houston Fire Department told The Anadolu Agency.

"Mr. Ferguson has been charged with first-degree felony arson," Ruy Lozano said. "It was through the Houston arson division's investigation in process of the scene that we determined that he was the culprit."

He said the fire department investigation was complete and it was up to a Harris County criminal court to decide whether the suspected arson resulted from religious bias.

The Council on American-Islamic Relations, or CAIR, a Muslim civil rights group, encouraged the federal government to investigate the fire as a hate crime.

As he was led out by law enforcement officials after his arrest, Ferguson told reporters that the fire he started was not intentional.

When asked if he started the fire to stay warm, he answered, "Yes sir," according to a video released by a local television station.

"It remains to be seen when he goes to trial if that is proved to be true or not," Ruth Nasrullah, spokeswoman for CAIR's Texas office, told The Anadolu Agency. "I understand that it was gasoline that was used to start the fire, which I believe is not normally something that you would find if someone as in his case was homeless and looking for one place to sleep."

She said her organization urged federal and state authorities to continue to pursue the investigation into exactly what happened.

The fire, in which no one was hurt, happened four days after a gunman who allegedly described himself a "gun-toting" atheist shot and killed newlyweds Deah Barakat and Yusor Abu-Salha, and her sister Razan Abu-Salha.

A grand jury in North Carolina indicted suspect Craig Stephen Hicks on three counts of first-degree murder as the FBI announced it has launched a separate hate crime inquiry.

Speaking to The Anadolu Agency about the fire, an FBI agent said the agency was monitoring the local investigation.

"When they are finished ... we will go to the Justice Department civil rights division and they will determine whether or not to open up a civil rights investigation at the federal level," special agent Pat Villafranca said Tuesday morning.

Ferguson was convicted twice in 1996 and 2001 of "driving while intoxicated," according to court documents.

“I believe obviously it could have been an accident,” the Islamic center's assistant imam Ahsan Zahid told the local television station. “If that’s what it turns out to be, we’ll be happier than if it was a hate crime.”