Hurricane Arthur crossed the coast near Cape Lookout at the southern end of North Carolina's Outer Banks at 11:15 p.m. EDT on Thursday (0315 GMT Friday), with maximum sustained winds of 100 miles per hour (160 kph). 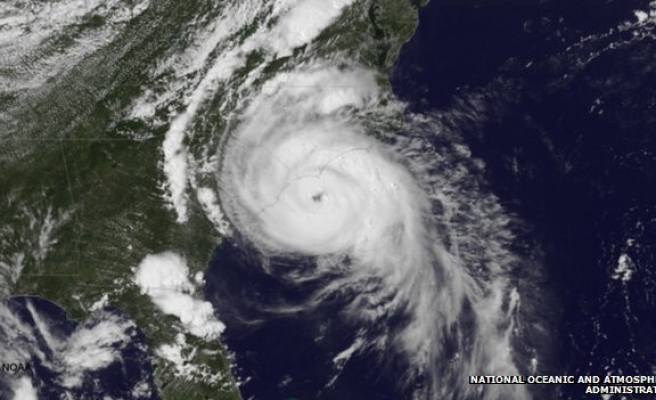 The first hurricane of the Atlantic season has hit the North Carolina coast, a wet and windy spoiler of the July Fourth holiday for thousands of Americans as authorities ordered them to evacuate exposed areas.

Hurricane Arthur crossed the coast near Cape Lookout at the southern end of North Carolina's Outer Banks at 11:15 p.m. EDT on Thursday (0315 GMT Friday), with maximum sustained winds of 100 miles per hour (160 kph). This earned it Category 2 status on the five-step Saffir-Simpson scale of hurricane intensity, the U.S. National Hurricane Center said.

Arthur is the first hurricane to hit the United States since Superstorm Sandy devastated parts of New York and New Jersey in October 2012 and caused $70 billion in estimated damage.

As of early on Friday morning, Arthur was moving at about 23 mph (37 kph) as it headed oceanward about 20 miles east of Kitty Hawk, North Carolina, said National Hurricane Center meteorologist Chris Landsea.

"It's pushing offshore from the Outer Banks of North Carolina. It did not stay over land very long and it did not traverse a lot of land," Landsea said, adding it lingered over Pamlico Sound for about six hours.

More than 20,000 customers were without power near North Carolina's coast as Arthur rushed through early on Friday morning, according to utility Duke Energy.

However, Arthur remained a medium-sized storm with hurricane-force winds extending outward only up to 40 miles (65 km) and lesser tropical storm-force winds 150 miles (240 km).

After cutting through the Outer Banks, Arthur was moving northeastward over cooler water on Friday, diminishing in strength as wind-shear disrupts its structure and posing little risk to the densely populated northeastern United States, Landsea said.

Tropical storm warnings would be in effect throughout Friday for eastern Massachusetts, including Nantucket. Arthur would be around western Nova Scotia in Canada early on Saturday.

The storm disrupted Independence Day festivities and fireworks for holiday beachgoers and others ordered off low-lying North Carolina barrier islands in its reaches.

Tourists and some residents packed ferries and crowded the only highway off Ocracoke and Hatteras islands, where voluntary and mandatory evacuations were in effect, though some people stayed behind to look after their homes.

North Carolina officials warned of life-threatening rip currents and a storm surge of up to 5 feet (1.5 meters) that could render the narrow 50-mile (80 km) Highway 12 connecting Hatteras Island to the mainland impassable.

Part of the highway was washed out by storm surge for two months after Superstorm Sandy, forcing people to use ferries to reach the mainland.

North Carolina was putting extra heavy equipment in place to remove sand and the overwash as soon as possible after Arthur passes. Hundreds of military and state police officials were deployed to help with storm preparation, safety and evacuation efforts.

Farther north, the beach resort of Ocean City, Maryland, and more than a dozen communities in New Hampshire and Connecticut put off their July Fourth fireworks display to Saturday.