Hurricane Igor pounded Bermuda early as it moved north over the Atlantic, skirting the U.S. East Coast, which should suffer only rough surf and a stiff breezes. 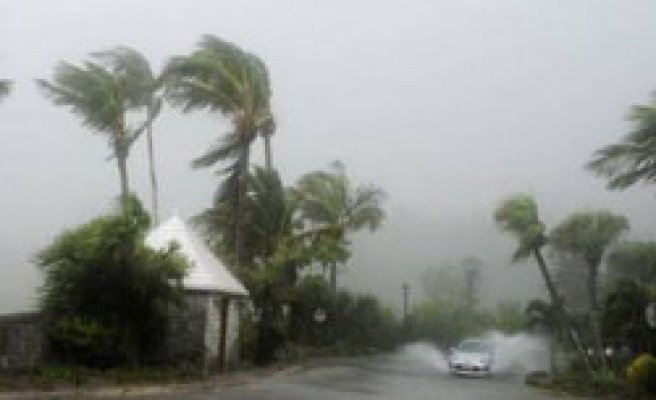 Hurricane Igor pounded Bermuda early on Monday as it moved north over the Atlantic, skirting the U.S. East Coast, which should suffer only rough surf and a stiff breezes.

The hurricane was moving north northeast at 16 miles (26 km) per hour. A turn northwest away from the coast and an increase in forward speed were expected in the next 12-24 hours.

Igor was a very large storm, with hurricane force winds extending out about 90 miles (150 km) from its center.

Bermuda residents reported uprooted trees, flying debris, widespread power outages, some flooding of streets and homes and boats torn free from moorings. There were no immediate reports of casualties.

Well over half of the territory's electricity users were hit by power outages according to the local power utility Belco. Bermuda has a population of more than 67,000.

Police spokesman Dwayne Caines said on Sunday high winds had driven waves up to 10-12 feet (3-3.6 meters) high "almost coming to the buildings in front of the ferry terminal" in the capital Hamilton.

"The rain is coming in sideways, basically it is very rough. Trees are down and there are branches blowing all over the place and there is lots of debris flying," Mark Tatem, a photographer for The Royal Gazette newspaper, wrote in a live hurricane chatroom set up by the paper.

Several roads in the capital were flooded.

Bermuda's roads were deserted and churches had canceled services. Most shops and restaurants in the capital were boarded up and residents had bought up emergency supplies like fuel, batteries, food and candles.

Local authorities on Sunday closed the causeway that links L.F. Wade International Airport and the eastern parish of St. George's to the rest of Bermuda. The airport was also closed.

Hurricane expert Jeff Masters of private U.S. forecaster Weather Underground said Igor lost some of its original destructive power due to the collapse of its eyewall -- a hurricane's most damaging inner zone -- earlier on Sunday.

The hurricane centre predicted total rainfall of 6 to 9 inches (15 to 22 cm) over the Atlantic territory and said Igor's storm surge could produce significant coastal flooding and destructive waves, particularly along the south coast.

East of Igor, weakening Tropical Storm Julia posed no threat to land, and it was expected to dissipate on Tuesday, the hurricane center said.

In Mexico over the weekend, the remnants of Hurricane Karl dissipated over the mountains of south central Mexico, after killing at least eight people, emergency workers said.

Karl appeared to have spared Mexican oil operations from major damage after sweeping through the Bay of Campeche, where Mexico produces more than two-thirds of its 2.55 million barrels per day of crude output.