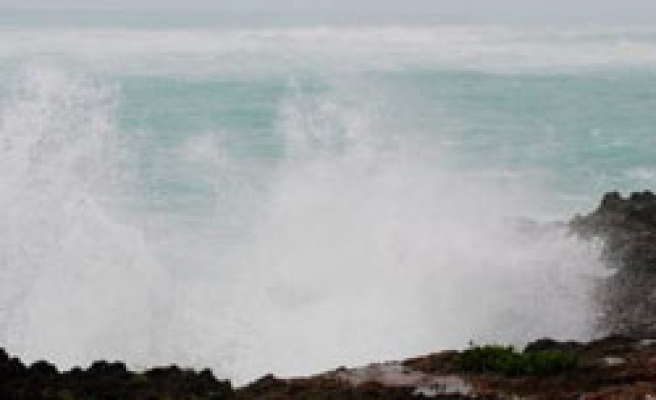 Hurricane Igor pummeled Bermuda with tropical storm force winds and squalls on Sunday as it bore down on the Atlantic island chain, which braced for a direct hit from one of the worst hurricanes to menace it.

As Igor closed in on the tiny British overseas territory, it was earlier downgraded to a still-dangerous Category 1 hurricane, with sustained winds of 85 mph (140 kph), down from as high as 100 mph (160 kph) on Saturday.

Hurricane-force winds extended out about 90 miles (150 km) from the hurricane's center, the Miami-based U.S. National Hurricane Center said, generating large swells as far away as the U.S. East Coast.

At 8 a.m. EDT (1200 GMT), Igor's core was located about 190 miles (305 km) south of Bermuda, bringing tropical storm conditions and squalls to the wealthy hub for the global insurance industry, which is also a popular tourist destination.

Igor was moving north at 13 miles (20 km) per hour. Bermuda Premier Ewart Brown warned residents to brace for "one of the worst hurricanes to ever threaten our shores."

"It's a ghost town out there," said Tipper Raven from London on a two-week vacation in Bermuda, referring to the shuttered shops in Hamilton, the capital.

The hurricane center said Igor's center would pass over or near the island on Sunday evening or night.

Igor was "expected to remain a dangerous hurricane" as it approached Bermuda, the hurricane center said.

It predicted total rainfall of 6 to 9 inches (15 to 22 cm) over the Atlantic territory and said the storm's surge could produce significant coastal flooding and large, destructive waves, particularly along the southern coast.

"Our country and our people have throughout our history rarely faced the full fury of a storm of this magnitude," Brown told a news conference.

Due to rigorous construction codes, Bermuda's buildings are considered some of the most weather-proof in the world, weather forecasters and analysts say, which could help mitigate any storm damage.

Most shops and restaurants in the capital were boarded up and many residents were buying up supplies such as fuel, batteries, food and candles.

The Bermuda government has warned residents to prepare for an impact similar to that of Hurricane Fabian in 2003, which killed four people and caused millions of dollars of damage.

Authorities closed the island's international airport and were monitoring winds to determine whether to a close off a causeway linking the airport to the rest of Bermuda.

East of Igor, Tropical Storm Julia posed no threat to land and its 50 mph (85 kph) winds were seen weakening over the next two days.

In Mexico, the remnants of Hurricane Karl, now a tropical depression, dissipated over the mountains of south central Mexico. Emergency workers reported at least eight people had been killed by the storm in three states. The port city of Veracruz was cut off by flooding from the rest of hard-hit coastal Veracruz state.

Karl appeared to have spared Mexican oil operations from major damage after sweeping through the Bay of Campeche, where Mexico produces more than two-thirds of its 2.55 million barrels per day of crude output.