New York City ordered unprecedented evacuations and transit shutdowns as states from the Carolinas to Maine declared emergencies due to Irene. 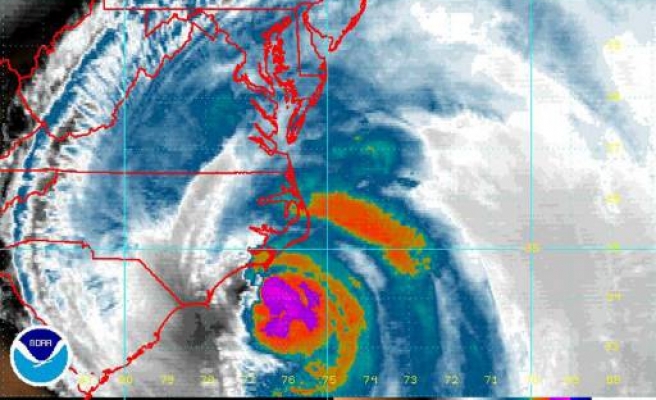 Hurricane Irene lashed North Carolina with heavy winds, rain and surf on Saturday as it neared land on a path threatening the densely populated U.S. east coast with flooding and power outages.

New York City ordered unprecedented evacuations and transit shutdowns as states from the Carolinas to Maine declared emergencies due to Irene, whose nearly 600 mile (960 km) width guaranteed a stormy weekend for tens of millions of people.

With winds of 90 miles per hour (150 km per hour), Irene weakened slightly to a Category 1 hurricane on the five-step Saffir-Simpson scale by early Saturday but forecasters warned that it remained a large and dangerous storm.

In the port and holiday city of Wilmington, North Carolina, thousands of people were without electricity as Irene's winds intensified. The streets were empty before dawn and the air was filled with the smell and sound of pine trees cracking under the advancing storm.

"Some weakening is expected after Irene reaches the coast of North Carolina but Irene is forecast to remain a hurricane as it moves near or over the mid-Atlantic states and New England," it said.

In summer weather, hundreds of thousands of residents and vacationers had evacuated from Irene's path. Supermarkets and hardware stores were inundated with people stocking up on food, water, flashlights, batteries, generators and other supplies.

"Our number of customers has tripled in the last day or two as people actually said 'Wow, this thing is going to happen'," said Jack Gurnon, owner of a hardware store in Boston.

Airlines canceled nearly 7,000 flights over the weekend and all three New York area airports were due to close to incoming flights at noon (1600 GMT) on Saturday.

President Barack Obama said the storm could be "extremely dangerous and costly" for a nation that recalls the destruction in 2005 from Hurricane Katrina, which swamped New Orleans, killed up to 1,800 people and caused $80 billion in damage.

Soldiers at the ready

Irene, the first hurricane of the 2011 Atlantic season, caused as much as $1.1 billion in insured losses in the Caribbean, catastrophe modeling company AIR Worldwide said.

Losses are expected along the U.S. east coast from high winds, heavy seas, flooding and fallen trees. Irene is the first hurricane to hit the U.S. mainland since Ike pounded Texas in 2008.

A quarter of a million New Yorkers were ordered to leave homes in low-lying areas, including the financial district surrounding Wall Street in Manhattan, as authorities prepared for flooding on Sunday.

A mandatory evacuation was ordered for residents in large areas of nearby Long Island, which juts into the Atlantic.

New York's mass transit system, which carries 8.5 million people on weekdays, was due to start shutting down around midday on Saturday.

"We've never done a mandatory evacuation before and we wouldn't be doing it now if we didn't think this storm had the potential to be very serious," Mayor Michael Bloomberg said.

In Washington, Irene forced the postponement of a ceremony on Sunday to dedicate the new memorial to civil rights leader Martin Luther King Jr. Tens of thousands of people, including Obama, had been expected to attend.

Flooding from Irene killed at least one person in Puerto Rico and two in Dominican Republic. The storm knocked out power in the Bahamian capital, Nassau, and blocked roads with trees.