Hurricane Irene strengthens on path to US

Irene regained force as a Category 2 storm on the five-step Saffir Simpson scale, with top winds of 100 miles per hour (155 km per hour), the U.S. National Hurricane Center said. 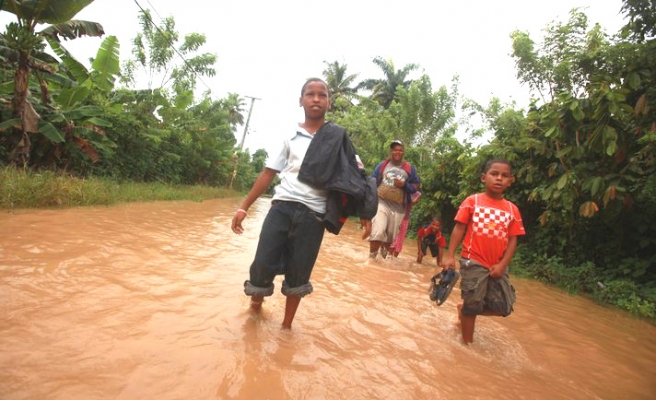 Hurricane Irene strengthened on Wednesday as it roared up from the Caribbean on a path that prompted residents along the U.S. east coast to prepare for a possible hit over the weekend.

Irene regained force as a Category 2 storm on the five-step Saffir Simpson scale, with top winds of 100 miles per hour (155 km per hour), the U.S. National Hurricane Center said.

"Irene could become a major hurricane within the next day or so," the center said.

Even as the first hurricane of the 2011 Atlantic season pounded the Turks and Caicos Islands and the southeast Bahamas with winds, rain and a dangerous storm surge, people in the Carolinas on the southeastern U.S. coast were getting ready for the storm's approach.

Irene, the ninth named storm of the June-through-November season, looks set to be the first hurricane to hit the United States since Ike pounded the Texas coast in 2008. But forecasts showed it posing no threat to U.S. oil and gas installations in the Gulf of Mexico.

Irene had weakened on Tuesday to a Category 1 hurricane but could strengthen into a major Category 3 storm with winds over 111 mph (178 kph) by Thursday, the hurricane center said.

The storm is forecast to approach the coast of the Carolinas on Saturday morning. After that, the saturated New England region could be at risk from torrential rains, high winds and flooding from Irene, Federal Emergency Management Agency Administrator Craig Fugate said on Tuesday.

Major eastern cities like Washington and New York could feel some impact, the forecasts showed.

In North Carolina, Governor Bev Perdue urged residents to ensure they had three days worth of food, water and supplies.

Voluntary evacuations were to begin on Wednesday for parts of North Carolina's Outer Banks, a stretch of barrier islands and beaches that are popular summer holiday spots.

Irene drenched the northeastern Caribbean islands earlier in the week. The first death from the storm was reported on Tuesday in Puerto Rico, where a woman was swept away.

Heavy rains continued to pelt the U.S. Caribbean territory, causing flooding and mudslides. Nearly 300,000 residents were without electricity and 58,000 were without water.