Irene, a major Category 3 storm with winds of 120 miles per hour, was pounding southeast Bahamian islands with winds, rain and dangerous storm surge. 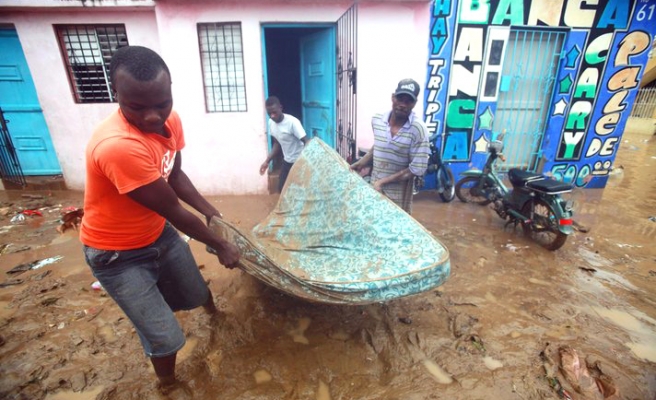 Powerful Hurricane Irene battered the Bahamas on Wednesday on a track to the North Carolina coast that forecasters say could threaten the densely populated U.S. Northeast, including New York, starting on Sunday.

The first hurricane of the storm-filled 2011 Atlantic season is expected to gather power after it leaves the Bahamas on Thursday and race across open warm waters to clip North Carolina's jutting Outer Banks region on Saturday afternoon.

After that, forecasters see it hugging the U.S. eastern seaboard, swirling rains and winds across several hundred miles (km) as it churns northward toward New England. The forecast track indicates Florida and Georgia will be spared.

"The exact center of the storm may actually stay pretty close to the coastline during the day on Saturday and then become a big threat for New England and perhaps Long Island toward 96 to 100 hours out on Sunday," National Hurricane Center Director Bill Read said.

"Be advised, it's going to be a very large circulation as it moves north of the Carolinas," he told a conference call.

If Irene makes a direct landfall in the continental United States, it will be the first hurricane to hit there since Ike pounded Texas in 2008. But forecasts showed it posing no threat to U.S. oil and gas installations in the Gulf of Mexico.

Irene's torrential rains were blamed for two deaths in the northeast Caribbean islands. A woman in Puerto Rico and a Haitian man in the Dominican Republic were swept away by floodwaters from overflowing rivers.

States from the Carolinas northward were on alert and evacuations were already under way in Ocracoke, the most exposed of North Carolina's Outer Banks barrier islands.

New York Governor Andrew Cuomo ordered the state's Office of Emergency Management to prepare for possible impact from Irene. Cuomo said coastal zones were most at risk, although inland areas could get hit by heavy rainfall and strong winds.

Forecasters have warned that even if the center of the hurricane stays offshore as it tracks up the mid-Atlantic coast from the weekend, its wide, swirling bands could lash cities including Washington and New York with winds and rain, knock out power, trigger coastal storm surges and cause flooding.

"We're not paying attention just to the eye of the storm. We're looking at how wide it is, how large it is," Virginia Emergency Management Department spokesperson Laura Southard said, advising residents to prepare.

Earlier on Wednesday, Irene strengthened over the Bahamas to a major Category 3 hurricane on the five-step Saffir-Simpson intensity scale, posing a high risk of injury and death. The NHC said it could become a Category 4 by Thursday.

"Someone's roof is in my front yard," Harvey Roberts, an assistant administrator on the sparsely populated southeast Bahamas island of Mayaguana told reporters on Wednesday, saying "tremendous winds" were lashing homes and buildings there.

Farther north on the scattered low-lying Bahamas, including Nassau, residents were frantically preparing.

"Everyone is either pulling up boats or putting up shutters. We are very well prepared," said Chuck Pinder, a 28-year-old fisherman in the community of Spanish Wells.

NHC chief Read predicted a "really tough time" for the Bahamas as Irene swept through over the next 24-36 hours.

Royal Caribbean and Carnival were among major international cruise lines that rearranged itineraries for more than a dozen ships in the area.

Energy firms planned to shut more than 28 million barrels of oil storage capacity in the Bahamas and refineries on the U.S. East Coast were preparing for the storm.

On the U.S. mainland, across the Carolinas coastline and in neighboring Virginia, residents stocked up with food, water and other supplies, including plywood to board up windows.

Sam's Club at Chesapeake Square, a members-only discount warehouse, reported a run on batteries, water and generators. "There are people stocking up like crazy -- we're out of generators," said Tracy Hatfield at the warehouse.