The blood of immigrants flows through all our veins, House minority leader says 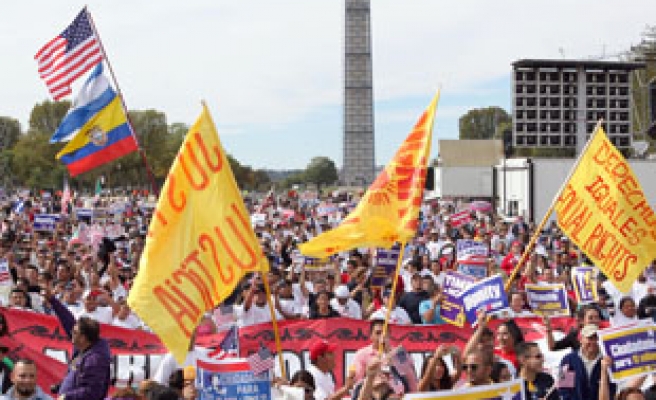 Thousands of demonstrators marched from the National Mall to Capitol Hill Tuesday to call on the US Congress to reform America’s immigration policy.

“It’s important for everyone to let your voices be heard today, to be present, to let people know that we’re not going to stop until this is done, ladies and gentlemen,” said DC Mayor Vincent Gray during the “Camino Americano: March for Dignity and Respect” rally.

He added, “As you know, Congress is currently working on a plan that is being crafted by Republicans and Democrats alike. That plan is made up of four parts: one, creating a pathway to citizenship for the nation’s 11 million undocumented immigrants. Secondly, reforming the legal immigration system in this nation. Third, establishing an effective employment verification system. And fourth, creating an improved process for admitting into the US valuable workers to our country.”

Members of Congress were also on hand to voice their support for changes to America’s immigration laws.

And with chants of “Si, se puede”, or “Yes, we can”, erupting throughout her speech, House Minority Leader Nancy Pelosi recalled America’s immigrant identity.

“The blood of immigrants flows through all our veins,” said Pelosi.

Several members of Congress and activists were later arrested after they attempted to block an intersection near the Capitol in an act of protest, according to Capitol Police.

The march almost did not come to pass as the National Mall is officially shuttered as a result of the government shutdown. The Parks Service said, however, that the rally was protected under the US Constitution’s First Amendment, which upholds free speech. The same rationale has been used to allow American veterans access to war memorials erected in their honor during the shutdown.