In U.N. speech, Obama appeals for broad coalition against ISIL

The U.S. president's over-arching message was aimed at bolstering the fight, both militarily and diplomatically. 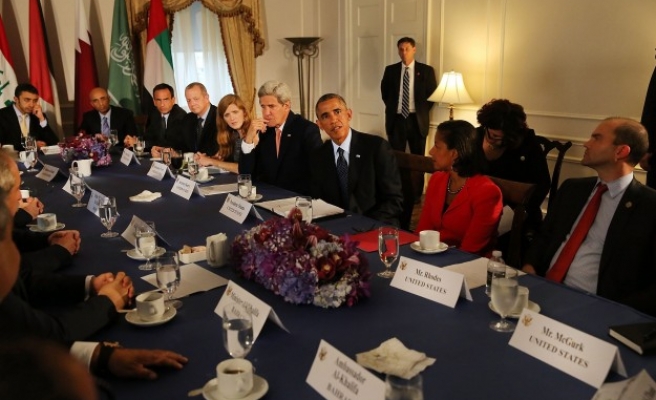 U.S. President Barack Obama made his case to the United Nations on Wednesday for a more forceful, coordinated global response against militants in the Middle East that would seek to dismantle their "network of death."

In a speech to the U.N. General Assembly in New York, Obama used graphic language to condemn the methods of the ISIL group that has taken over swaths of Iraq and Syria, saying it had used rape as a weapon of war, gunned down children, dumped bodies in mass graves, and beheaded their victims.

Obama, who this week expanded the U.S.-led military campaign into Syria with support from five Arab nations, warned ISIL fighters to "leave the battlefield while they can." Before the president spoke, U.S.-led airstrikes for the third time this week pounded targets.

"Today, I ask the world to join in this effort," Obama said. He said more than 40 nations have offered to join the coalition against the militants in Iraq and Syria.

The U.S. president's over-arching message was aimed at bolstering the fight, both militarily and diplomatically.

Obama, whose legacy is based in part on his decision to extract U.S. forces from Iraq, said the United States does not intend to occupy any countries, but wants to act in concert with other nations to support people fighting to reclaim their communities from militants.

"The only language understood by killers like this is the language of force. So the United States of America will work with a broad coalition to dismantle this network of death," Obama said in a speech that ran to just under 40 minutes.

Obama used his annual speech to the 193-nation General Assembly to address a host of problems facing the world, from Russia's interference in Ukraine, to the deadly Ebola virus in West Africa and the Israeli-Palestinian conflict while also recognizing that the United States had its "own racial and ethnic tensions."

"And like every country, we continually wrestle with how to reconcile the vast changes wrought by globalization and greater diversity with the traditions that we hold dear," Obama said.

Obama sent messages to Moscow to back down from its actions in Ukraine and for another old adversary, Iran, to "not let this opportunity pass" to forge a nuclear deal in exchange for loosening of western sanctions. Indirectly, he also urged China to ease its pressure on Asia-Pacific neighbors.

"Too often, we have failed to enforce international norms when it's inconvenient to do so," Obama said. "And we have not confronted forcefully enough the intolerance, sectarianism, and hopelessness that feeds violent extremism in too many parts of the globe."

In a departure from his prepared text, Obama urged Israel to extend an olive branch to the Palestinians after a summer of violence in Gaza.

Too many Israelis, he said, were ready to abandon the hard work of peace and added that this was something "worthy of reflection within Israel."

"Because let's be clear: the status quo in the West Bank and Gaza is not sustainable. We cannot afford to turn away from this effort," he said.

The "worthy of reflection" comment was unlikely to be warmly received by Israeli Prime Minister Benjamin Netanyahu, who has a rocky relationship with Obama and will meet him at the White House on Oct. 1.

Obama, who has been stymied in trying to resolve long-festering disputes in the Middle East, called for a broader negotiation in which major powers address their differences directly "rather than through gun-wielding proxies."

On Ukraine, Obama said if Russia took the path of peace and diplomacy, then the United States would lift its economic sanctions and would be prepared to engage in the type of diplomacy that in the past has reduced U.S. and Russian nuclear stockpiles and persuaded Syria to give up chemical weapons.

"That's the kind of cooperation we are prepared to pursue again if Russia changes course," he said.

Russian President Vladimir Putin has shown no inclination thus far to bow to Western demands that he end Russian actions in eastern Ukraine after seizing Crimea earlier this year.

On Iran, Obama said, "My message to Iran's leaders and people has been simple and consistent: do not let this opportunity pass. We can reach a solution that meets your energy needs while assuring the world that your program is peaceful."