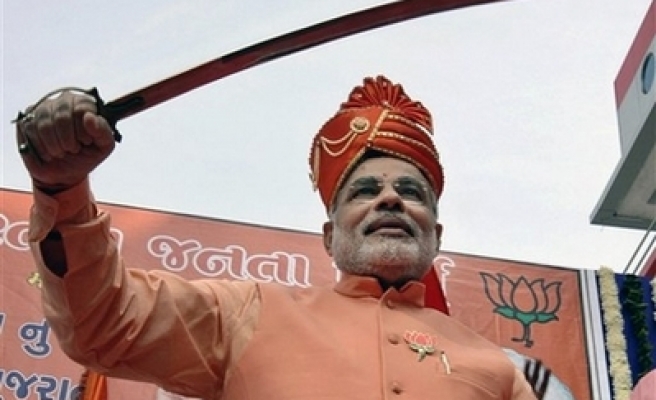 A U.S. court has ordered Indian Prime Minister Narendra Modi to answer allegations that he failed to stop anti-Muslim rioting when he was chief minister of Gujarat, overshadowing his first trip to the United States as his country's leader.

The civil case before a New York court seeks compensatory and punitive damages from Modi for crimes against humanity and extrajudicial killings under the Alien Tort Claims Act and the Torture Victim Protection Act. Modi has 21 days to respond.

The petitioner in the case is the American Justice Center, a non-profit human rights organisation, acting on behalf of two survivors of the 2002 riots in the western Indian state.

"There is evidence to support the conclusion that minister Modi committed both acts of intentional and malicious direction to authorities in India to kill and maim innocent persons of the Muslim faith," the petition said.

After years of being unwelcome in the United States, Modi arrives for a five-day visit on Friday in New York, where he will speak at the United Nations before heading to Washington for talks with President Barack Obama.

The first meeting between the two leaders follows Modi's landslide general election victory in May. Compared with other foreign powers, Washington was slow to warm to Modi, with its ambassador to India only meeting him in February when opinion polls put the Hindu nationalist leader on course to win.

Modi, 64, was denied a U.S. visa in 2005 under the terms of a 1998 U.S. law that bars entry to foreigners who have committed "particularly severe violations of religious freedom".

At least 1,000 people, most of them Muslims, died in a wave of attacks across Gujarat in February 2002.

Critics accuse Modi, who was chief minister of the state from 2001 until this year, of doing too little to stop attacks on minority Muslims. He denies the accusations and was exonerated in an Indian Supreme Court inquiry in 2012.

An Indian government spokesman was not available for comment while a spokesman for Modi's Bharatiya Janata Party declined to comment.

An analyst said the case was unlikely to have much impact.

"Modi is very thick skinned about the allegations after all these years," said Satish Misra, a political analyst at the Observer Research Foundation in New Delhi.

Nevertheless, Modi faces being dogged by protests on his U.S. trip even as he is expected to be warmly welcomed by much of India's large overseas community in the United States.

Modi will draw perhaps the largest crowd ever by a foreign leader on U.S. soil when he takes the stage on Sunday at New York's Madison Square Garden before a crowd forecast to total more than 18,000 people.

A group called the Alliance for Justice and Accountability is calling for people to picket the venue and wave black flags in protest.

Another group, the Sikhs for Justice, will convene a 'Citizen's Court' where they will indict Modi at a park in front of the White House when he meets Obama.

The court case seeking damages from Modi is being brought by two unidentified people from Gujarat.

One is a Muslim woman whose mother was allegedly attacked by a mob during the riots and died of her injuries a year later, according to the court documents.

The other plaintiff is man whose grandmother was killed and who says he was attacked by a gang of Hindus. When he approached the police, he alleges, they told him they had orders not to save any Muslims, according to the petition.