The Muslims all over the world are shocked and outraged with a deep sense of disillusionment. They are demanding similar reaction from the media elites of the world as they had displayed in Paris after Charlie Hebdo killings. 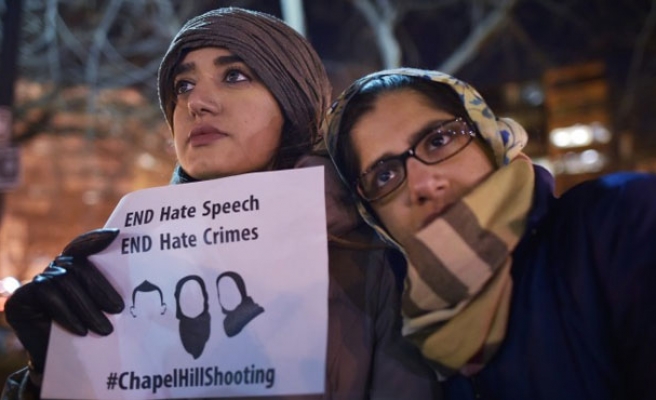 Even after a week of Chapel Hill killing of Muslim students, there seems to be no reaction in the world and no protest or demonstration marches were held anywhere. This silence is really very intriguing and smacks of the hypocrisy of the world leaders.

In a tragic incident, three Muslim students were killed in a dormitory of University of North Carolina at a quiet condominium complex in the Chapel Hill area. It was obviously a ghastly hate crime perpetrated in the name of religion. All the three victims were Muslim students of Arab descent, identified as Deah Shaddy Barakat, 23, his wife Yusor Mohammad, 21, and her sister, Razan Mohammad Abu-Salha, 19.  Barakat was a second-year student in the graduate school of dentistry and his wife planned to enroll there in the fall, and that Razan Abu-Salha was an undergraduate at North Carolina State University.

Brakat and Yusor were lovely newly-married couple. Yusor’s sister Razon was a sweet girl who was concerned about so much hate among people of different creeds and religions spread all over the world. All the victims were good students and socially very conscious. They volunteered for different welfare organizations to help the poor and needy people in the world.
In the night after the incident, the killer, Stephen Hicks, 46, turned himself in to police to face the murder charges for the "execution style" killings.

After the news got viral, there were comments from all over the world. One person commented, : I want to see protests, I want to see news coverage, I want to see marches, I want the same outrage expressed in France.” Another comment said, “RIP to the three #Muslims murdered. I'd like to see the same public uproar as the #CharlieHebdo aftermath.”

The Muslims all over the world are shocked and outraged with a deep sense of disillusionment. They are demanding similar reaction from the media elites of the world as they had displayed in Paris after Charlie Hebdo killings. Will the Western media gather courage to prove its consistency while covering the tragic occurrence of hate crimes, such as what happened in Chapel Hill in the US? Failing to do so, they will be degrading their credibility in the eyes of humanity.

People wonder when all the world leaders will come out, hold hands and march on the streets of Chapel Hill to condemn Islamphobia, hate crime and the victim of terrorism. The only world leader who questioned this hypocrisy and silence is Turkish President Recep Tayyip Erdogan "Oh Obama show your stance, don't remain silent against murder of three Muslim students," said Erdgogan at the press conference in Mexico.

All over the world, the Muslims feel outraged by this killing, and even more by the way the media covered it and the authorities handled it. This is an ominous reminder of another shocking incident that happened in France recently. In sharp contrast, the world media reported the Charlie Hebdo incident mostly in this way, “Two Islamist terrorists armed entered into the offices of the French satirical weekly newspaper Charlie Hebdo in Paris and fired up to 50 shots, initially killing 11 people and injuring 11 others.”
Whether there was one criminal and three victims (as in the case of Chapel Hill shooting) or two criminals and eleven victims (as in the case of Charlie Hebdo), the contentious words were “Islamist Terrorists” which were immediately used to describe the incident in France. But in contrast, the same terminology was not used in the case of American incident and media didn’t mention the “Christian terrorist”. Both were equally unfortunate and highly condemnable acts but the western media used different terminology to describe them.

Following the Charlie Hebdo incident, the outrage was felt all over the world. Many countries reacted very sharply; demonstrations and protest marches were held from New York to England. It is instructive to look how the world media reacted and reported this extremely shocking incident. American media mostly covered it as a normal crime news without any special attention. CNN, one of the biggest Television channels in the world and a leading mouthpiece of America, carried it with a simple headline “3 students shot to death in apartment near UNC Chapel Hill”.

The New York Times, one of the leading daily newspapers of the country, reported the incident as a small one column news tucked in a corner, with a headline: “Chapel Hill Shooting Leaves 3 Muslim Students Dead; Neighbor Is Charged”. In the intro it said, “A 46-year old man was arrested and charged in the fatal shooting of three students.” The Washingtom Post, another leading daily of America, carried the news with the headline, “Three Muslims killed in shooting near UNC; police, family argue over motive” and said, “A sudden, shocking spasm of violence near campus of the University of North Carolina here was followed quickly by alarm and debate about why three Muslims were allegedly gunned down by a neighbor and what role, if any, religion may have played.”

Although the wife of the arrested killer, at a news conference, declined that the incident had anything to do with religion or the victims' faith, the unfortunate father of the female victims, was very assertive that this was certainly related to hate crime. After knowing the details of how his two daughters and son-in-law were killed, he was further convinced about this ghastly hate crime. He said that when his son-in-law lived alone in the condominium complex, the family never had any problems. But after his daughter moved in there, wearing a headscarf that clearly identified her as a Muslim, the trouble started. He lamented, "My daughter, Yusor, honest to God, told us on more than two occasions that this man came knocking at the door and fighting about everything with a gun on his belt, more than twice. She told us, 'Daddy, I think he hates us for who we are and how we look’."

He rightly points out with anguish and pain, "Now that we know from the police that they were shot in the head, very quickly, the three of them, one bullet each, in a very small space inside in the apartment. That's execution-style. I don't know, if that is not hate, what that would be."

Will the Western media gather courage to prove its consistency while covering the tragic occurrence of hate crimes, such as what happened in Chapel Hill in the US? Failing to do so, they will be degrading their credibility in the eyes of humanity.