Irene, the ninth named storm of the busy 2011 Atlantic season, looks set to be the first hurricane to hit the United States since Ike savaged the Texas coast in 2008. 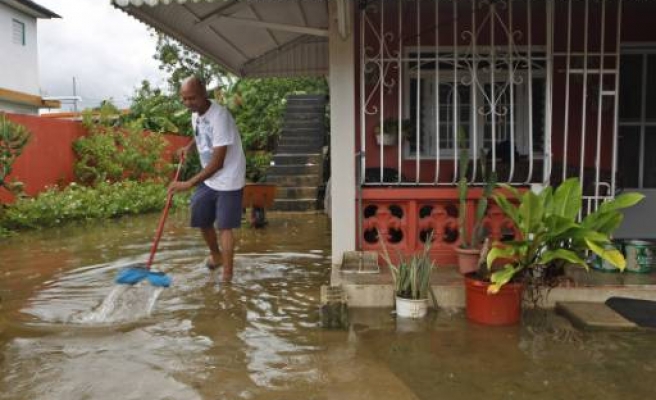 Hurricane Irene strengthened into a Category 2 hurricane as it swept north of the Dominican Republic on Monday and could hit the Southeast United States as a larger and more powerful storm during the weekend, forecasters said.

The U.S. National Hurricane Center's five-day forecast showed the first hurricane of the 2011 Atlantic season swinging parallel to Florida's east coast on Thursday for a possible landfall in North or South Carolina on Saturday.

Irene, the ninth named storm of the busy 2011 Atlantic season, looks set to be the first hurricane to hit the United States since Ike savaged the Texas coast in 2008.

It could also be the catalyst that the insurance industry has been seeking in its quest for across-the-board premium increases, in what already promises to be the costliest year in history for natural disasters around the globe.

Authorities along the U.S. Atlantic seaboard, from Miami to New York, were closely watching Irene's possible path, with at least some computer forecast models showing it might even sweep up near New York City early next week.

President Barack Obama was briefed about Irene while on vacation on the Massachusetts island of Martha's Vineyard, White House officials said.

Irene was expected to strengthen further into a Category 3 hurricane on the five-step Saffir-Simpson intensity scale, with winds over 111 mph (178 kph), before hitting the southeast U.S. coast by the weekend, the Miami-based hurricane center said.

The storm was off the northern coast of the Dominican Republic on Monday night and was moving west-northwest. It seemed to have spared the economically important tourist area of Punta Cana as it passed by earlier in the day.

"It was a non-event ... It was kind of just of rainy day, it could have been a lot worse," Mike Bryant, who runs a small adventure tourism company at Punta Cana, told Reuters.

Irene was just north of Hispaniola, the island shared by the Dominican Republic and Haiti, and was on a track that would take it over the Turks and Caicos Islands and southeastern Bahamas on Tuesday and the central Bahamas by Wednesday.

In Haiti there were fears that rain from Irene could trigger deadly floods and mudslides in the country, which is still struggling to recover from a devastating 2010 earthquake.

Forecasters said a low pressure trough over the eastern United States was expected to keep Irene's track to the east, reducing the risk of a direct hit to densely populated south Florida, and steering it instead to the Carolinas.

While the core of the storm was expected to stay out to sea as it moved past Florida, Irene was wide enough for its outer squalls to reach the Florida shore.

Forecasts showed Irene posing no threat to U.S. oil and gas installations in the Gulf of Mexico.

There were no reports of deaths or major injuries. But 800,000 people -- half of the island's electricity customers -- were left without power by the storm, which felled trees, swelled rivers over their banks and flooded some roads.

Governor Luis Fortuno said the worst-hit area was the east coast, from Fajardo to Yabucoa, and he had asked the U.S. government to declare Puerto Rico a disaster area so it can gain access to emergency funds.