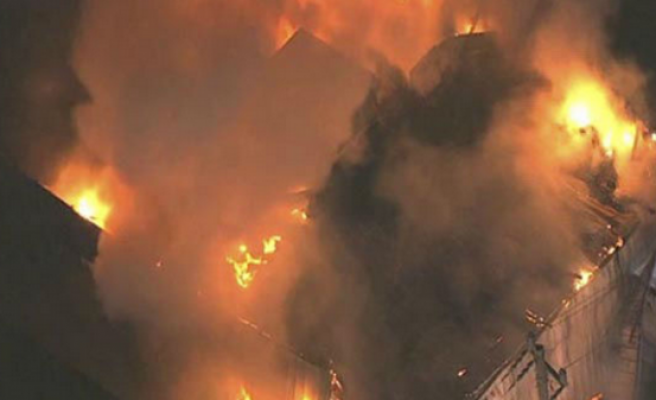 A massive blaze has ripped through an Islamic community center in Houston, Texas, on Friday.

Fire has damaged an Islamic community and education center in Houston at a time when the religious complex was unoccupied.

The Houston Fire Department says nobody was hurt in the fire around 5:30 a.m. CST Friday at the Quba (KOH'-buh) Islamic Institute.

The fire at Islamic center in southeast Houston left the facility's faithful wondering if what appears to be an intentionally set fire was tied to their religion.

"I hope it's not a hate crime," said Ahsan Zahid, one of the imam's son's. "Preliminary results say it's arson."

Fire officials now say an accelerant was used in a fire that broke out at an Islamic community and education center in southeast Houston early Friday morning, and now a group is calling for an investigation into whether the fire was the result of a possible hate crime.

Houston fire officials say the fire at the Quba Islamic Institute started around 5am. The cause of the fire is under investigation, but we've learned HFD says the accelerant was used, which usually points to a purposeful act. Those same investigators met with leaders at another Islamic center just miles away, letting them know that this was an act of arson and to be on alert.

The Council on American-Islamic Relations is calling on state and federal authorities to investigate the fire as a possible hate crime.

That call comes as Ahsan Zahid, assistant Imam at the institute, says he spoke with the Houston arson investigator about their preliminary results.

Zahid said, "They said their dog went through and he hit on some substances inside the place, and he said, 'From what I see right now at this point, I have to say it was an incendiary fire which means that it was started on purpose.' That's all we can go on at this point. I don't want to speculate."

Though we don't know officially if the cause was accidental or deliberate, the FBI is now monitoring the situation.

The Houston Fire Department says no one was in the building at the time of the fire and no one was hurt. They say the blaze was under control by 6:15am.

Officials with the Islamic center estimate the damages to be around $100,000.