Kerry calls for 'coalition of nations' against ISIL

The U.S. is trying to assemble an international coalition to help combat the threat posed to the Middle East by the so-called Islamic State. 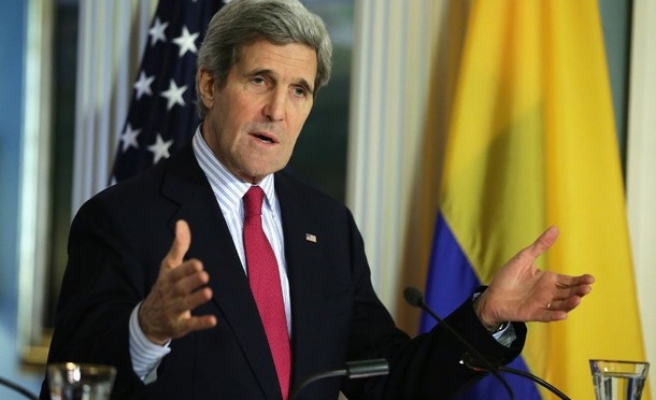 US Secretary of State John Kerry called Friday for a global coalition of nations to combat ISIL's "genocidal agenda" in Syria and Northern Iraq.

Kerry advocated "a united response led by the United States and the broadest possible coalition of nations" in an op-ed in the New York Times.

The top US diplomat said he and Secretary of Defense Chuck Hagel would "meet with our counterparts from our European allies. The goal is to enlist the broadest possible assistance," on the sidelines of the NATO summit.

In his column, Kerry said that Obama will put forward a plan for dealing with ISIL at a summit meeting of the UN Security Council in September, when the US holds the group's rotating presidency.

The U.S. is trying to assemble an international coalition to help combat the threat posed to the Middle East by the so-called Islamic State.

The U.S. State Department said earlier the coalition may be drawn from Europe, the Arab world and beyond.

State Department spokeswoman Jen Psaki said "I think it’s really important for everybody to broaden this far past the possibility of strikes or far past a military step," Psaki said Wednesday. She said there were many ways to contribute, including humanitarian, intelligence and diplomatic efforts.

"This is about addressing the long-term threat of IS ... an effort that is going to require significant focus and all hands on deck – not just the United States, but a range of countries," Psaki said. She commended the efforts of Australia, Canada, France, Germany, Jordan, Saudi Arabia, the United Kingdom, and many others who have given military or humanitarian assistance.

Psaki said U.S. officials were talking to a range of countries -- whether Sunni or not -- about how they could participate in this effort.

President Barack Obama has already decided to arm and equip the Syrian opposition, pending approval by Congress once it returns Sept. 8 following a five-week recess.

The Obama administration announced in June that it would step up military support to the Syrian rebels after determining that the Syrian government had deployed chemical weapons against opposition groups, crossing what Obama had called a "red line."

U.S. officials have ruled out cooperating with the Syrian regime, though, as the U.S. does not recognize Bashar al-Assad as the country's legitimate leader.

Turkey, however, appears to be on the short list of regional partners the U.S. could use as staging grounds.

Psaki said Turkey was one of the countries the U.S. would naturally talk to as a "longstanding counterterrorism partner of the United States."