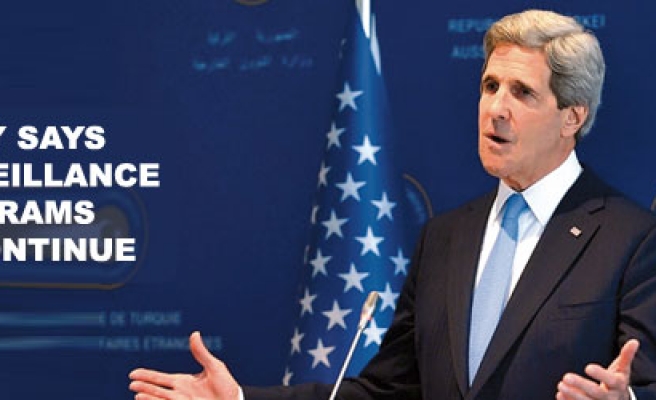 US Secretary of State John Kerry has defended the US surveillance programs which recently threatened to cause a major rift in relations with Brazil and other Latin American nations. Kerry, who is in Brazil to strengthen bilateral ties as part of two-day tour that has already taken in a visit to Colombia, said the programs would continue despite calls from Brazil to end the spy programs.

At a joint press conference in Brasília with Brazilian counterpart, External Affairs Minister Antonio Patriota, Kerry said the intelligence-gathering program at the heart of a spy scandal story exposed by Brazil’s O Globo daily newspaper had given "security to North Americans, Brazilians and others in the world" but that he would work to provide transparency for his Brazilian colleagues and others affronted by the surveillance.

"We believe that our intelligence service protects our nation, as well as others. We will continue to do it," Kerry said, adding that the US had not been "surprised or upset that Brazil would ask questions" and that the regional powerhouse was "owed answers with respect to those questions and they will get them."

"We will work together to make certain that [these issues] do not get in the way of all the other things that we talked about," Kerry said, assuring reporters that the US was talking to their Brazilian partners about the program, although operational issues could not be discussed publicly.

Patriota said that US-Brazil relations were maturing on many fronts, but criticized the program and warned that mutual trust and bilateral relations could be damaged if the US failed to give satisfactory explanations:

"We are facing a new type of challenge in our bilateral relation. We run the risk of casting a shadow of distrust over our work. We need to stop practices that violate sovereignty."

Clarifications not an end to issue

The spy program revelations focus on operations by the United States' National Security Agency (NSA), which is accused of accessing e-mails and telephone calls relating to ordinary Brazilians, as well as corporations and some political figures in other Latin American countries.

Kerry said that US would maintain direct dialogue with the Brazilian government to "make sure" Brazil agreed with what the US was doing "to give security to North Americans, Brazilians and others in the world.

Patriota confirmed that both technical channels of communication had been established, alongside already open political dialogue, but clarifications were not an end to the matter:

"Clarifications are being sought, but the clarifications are not an end to themselves. Clarifications do not mean we accept the status quo. We need to see an end to practices which damage sovereignty, damage trust between states, and which violate individual freedoms which our countries cherish so much," Patriota said.

Delicate moment ahead of state visit

The US secretary of state has arrived at a particularly sensitive time in US-Brazil relations, which had been experiencing what many deemed a "honeymoon" period after a much-praised visit by Barack Obama in 2011.

The Obama administration had hoped for warmer relations under incumbent President Dilma Rousseff, after a more at-arm’s-length approach to her predecessor President Luiz Inácio Lula da Silva, who had continued to cosy up to anti-American leaders, such as Venezuela's late President Hugo Chávez and former Iranian President Mahmoud Ahmadinejad.

Both countries are now attempting to ensure the spat does not boil over and detract from more pressing matters, such as trade, and are keen to address the topic sufficiently so that it does not adversely affect President Rousseff’s state visit to Washington, D.C., in October -- the first such visit by a Brazilian leader in two decades.

However, the US has made little apology for its surveillance program, which it stepped up following the attacks on New York and Washington, D.C, on September 11, 2001, and has been approved by all three branches of the US government.

Kerry has already spoken on the spy scandal during his one-day trip to the Colombian capital, Bogotá, on Monday, and cited recent threats to US embassies and the September 11 attacks as compelling argument for keeping the program alive.

"We are necessarily engaged in a very complex effort to prevent terrorists from taking innocent lives in many different places," Kerry told reporters in Bogotá after meeting with Colombian Foreign Minister María Ángela Holguín.

In Brasília, Kerry said it was now important for Brazil to look beyond the issue: "I ask the Brazilian people to focus on the important aspects that our countries share -- democratic values and determination in favour of diversity. [U.S.-Brazil] relations can have a positive global impact if we continue working as partners."