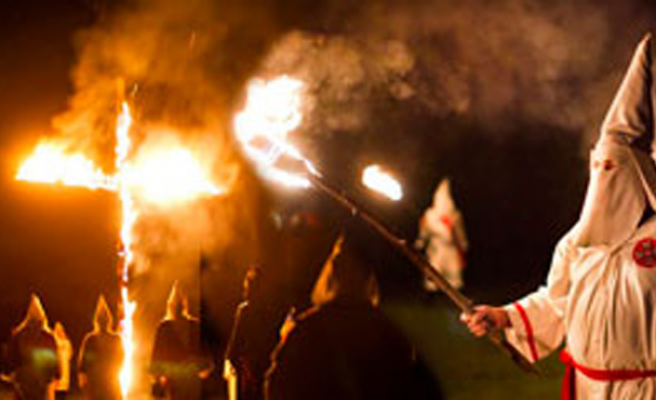 One of the most notorious far-right white supremacist groups in the U.S. have pledged to raise money for a police officer who made headlines last week after it was revealed that he shot and killed a black teenager in Ferguson, Missouri, triggering riots.

Murray told The Wire, “The KKK has raised funds. We have already raised nearly $1,200.”

"All money will go to the cop who did his job against the Negro criminal," the New Empire Knights announced, also declaring an event to “Stop Negro Crime and the Jewish Media Cover-up” on August 23-24 in Sullivan – approximately 60 miles from Ferguson.

U.S. Attorney General Eric Holder was due to visit Ferguson, Missouri, on Wednesday, hours after nearly 50 protesters were arrested in an 11th night of racially charged demonstrations over the killing of an unarmed black teenager by a white police officer.

The St. Louis County prosecutor's office also was expected to begin presenting evidence to a grand jury investigating the Aug. 9 shooting death of 18-year-old Michael Brown, in a case that Governor Jay Nixon vowed would be treated as a "vigorous prosecution."

Holder said he planned to visit Ferguson, a St. Louis suburb that is home to a predominantly African-American population of 21,000, to be briefed on the progress of a separate civil rights investigation he has ordered into the Brown killing.

In a special message to the community published online by the St. Louis Post-Dispatch, Holder said about 40 FBI agents have been assigned to the case, along with prosecutors in the U.S. Attorney's Office in St. Louis, and that hundreds of people have already been interviewed.

An independent autopsy, the third conducted in the killing, has also been performed by federal medical examiners at Holder's direction, he said.

"Our investigation into this matter will be full, it will be fair, and it will be independent," he said.

The turmoil, while generating international headlines, has exposed simmering racial tensions in a mostly black town whose police force, political leadership and public education administration are dominated by whites.

It also has re-ignited a national debate over racial disparities in the U.S. criminal justice system, even drawing sharp words on Tuesday from the United Nations' top human rights envoy, Navi Pillay, a native South African.

"I condemn the excessive force by the police and call for the right of protest to be respected," she said in Geneva.

Police and the governor have insisted that the most of the trouble has been generated by thugs or outside agitators bent on goading police into action.

Emotions could run high again next Monday, when a funeral service for Brown is scheduled.