Libyan forces closed in on Muammar Gaddafi's home town on Sunday, vowing to seize it by force if negotiations failed. 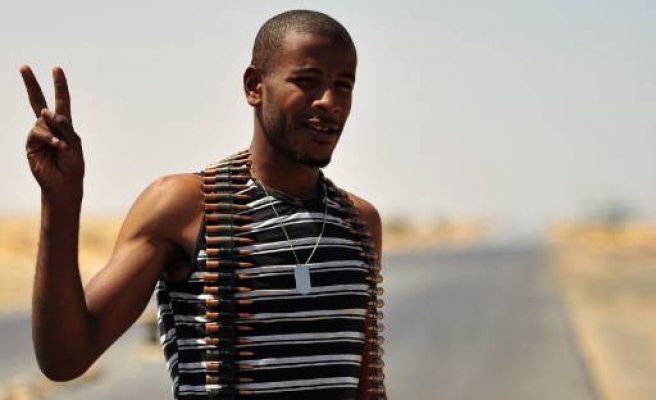 Libyan forces closed in on Muammar Gaddafi's home town on Sunday, vowing to seize it by force if negotiations failed, and their leaders ruled out any talks with the deposed ruler.

Gaddafi's foes were advancing on his birthplace of Sirte, which straddles the east-west coastal road, but one commander said "liberating" the city could take more than 10 days.

In a crucial step towards reviving Libya's battered economy, the pipeline that supplies Libyan natural gas to Europe has been repaired, Bani said.

"The gas pipeline is back and running, supplying the pump stations and the Mellitah (gas processing) refinery. Gas will start flowing to Europe," he told a news conference in Benghazi. He did not say when such shipments would resume.

In the far west, Tunisian authorities reopened the main border crossing into Libya and dozens of vehicles moved through on a road that is a key supply route for Tripoli. Libyan forces seized the Ras Jdir post from Gaddafi loyalists on Friday.

Tripoli streets were quiet after sporadic overnight gunfire and explosions in the capital, traumatised by emerging evidence of widespread summary killings that took place during last week's battles to drive Gaddafi out.

But some residents ventured out to hunt for scarce supplies of water, food and fuel. And in Martyrs Square, known as Green Square in the Gaddafi era, traffic police reappeared in crisp white uniforms, directing cars amid a sea of bullet casings.

"I came back to work on Friday. Life is beginning to come back to normal," said one policeman, Mahmoud al-Majbary, 49.

Asked if fighters were obeying the traffic police, he said: "Not yet, we're getting there slowly. We're mainly really here to reassure the people that they are safe."

Libyans may remain fearful as long as the man who subjected them to his capricious will for 42 years remains at large.

Gaddafi, 69, has so far evaded capture, perhaps intending to lead an insurgency against his disparate opponents grouped loosely under the National Transitional Council (NTC).

No talks with Gaddafi

NTC officials rejected any idea of talks with Gaddafi, saying he was a criminal who must be brought to justice.

"We did not negotiate when we were weak, and we won't negotiate now that we have liberated all of Libya," the NTC's information minister, Mahmoud Shammam, told a news conference.

The Associated Press earlier quoted Gaddafi's spokesman, Moussa Ibrahim, as saying Gaddafi was still in Libya and wanted to discuss forming a transitional government with the NTC.

NTC officials say Gaddafi, his son Saif al-Islam and his spy chief should be tried in Libya, although they are wanted by the International Criminal Court for crimes against humanity.

Sirte, 450 km (280 miles) east of Tripoli, is a vital prize for anti-Gaddafi forces attacking from east and west. They say they prefer a negotiated handover, but will fight if need be.

He said NTC troops were within 100 km of Sirte from the east and were also approaching from Misrata to the west.

Refaidy said there was no going back to the past. "After all this bloodshed we can't say, 'Come here Muammar, come here Saif -- we're sorry, take Libya'. It's done. Game over."

Shammam warned that negotiations could not be "endless", adding that if talks failed rebel supporters already in Sirte would rise up as they had in Tripoli before it fell.

In Tripoli, residents queued for bread or scoured grocery shops for food. Many took a stoical view of their plight.

"This is a tax we pay for our freedom," said Sanusi Idhan, a lawyer waiting to buy food.

Aymen Mohammed poured water into plastic containers for his neighbours. "There are many people here who don't have water so we're filling the bottles from our well," he said.

The stench of rotting bodies and burning garbage still hangs over the city. More and more bodies have turned up, some of slain Gaddafi soldiers, others victims of summary killings.

A Libyan official said 75 dead bodies had been found at the Abu Salim hospital, which was caught up in heavy fighting, and another 35 corpses were found at the Yurmuk hospital.

"Most of the hospitals are functioning except for Abu Salim," Usama el-Abed, deputy chairman of the Tripoli city council, told reporters. "We call on all the workers to go back to work to provide services for patients."

Evidence of cold-blooded killings by both sides has darkened the atmosphere in a city where many had greeted Gaddafi's fall with joy.

"The evidence we have been able to gather so far strongly suggests that Gaddafi government forces went on a spate of arbitrary killing as Tripoli was falling," Sarah Leah Whitson, HRW's North Africa director, said in a statement.

The NTC, which has told its fighters not to carry out revenge killings, is trying to assert its authority and restore order in Tripoli but its top officials have yet to move there from their Benghazi headquarters in the east.

Shammam, the information minister, said public sector workers would not lose their jobs in the new Libya.

"Salaries have been paid in almost all liberated parts of the country, though we are in the process of finalising payments for Tripoli and outlying areas. Money is still tight, but things will be better in the next few days," he said.

The NTC and the Western powers that backed rebel forces with a five-month bombing campaign are acutely aware of the need to prevent Libya collapsing into the kind of chaos that plagued Iraq for years after the U.S.-led invasion of 2003.