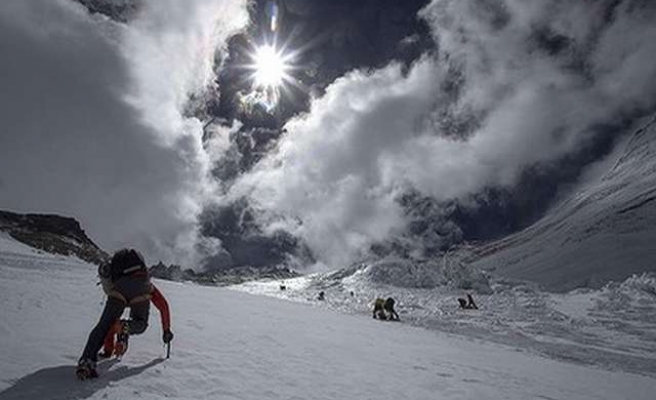 A planned search for six climbers believed to have fallen to their deaths while ascending Washington's Mount Rainier will be scaled back due to dangerous conditions, a park spokeswoman said on Sunday.

The search, already held up by ice and rock falls and poor visibility, has not been called off. But it will be limited to efforts to spot the missing climbers from helicopters, said Patricia Wold, a spokeswoman for Mount Rainier National Park.

"Due to the extreme danger of rock and ice fall at the bottom of the fall area we are not able to do a ground search," she said.

Officials believe the six climbers, caught in an avalanche of snow, rock and other debris, likely fell about 3,300 feet (1,000 meters) from the north face of the mountain in what would be the worst accident on Mount Rainier in three decades.

Helicopter crews found climbing and camping gear in snow more than 3,000 feet (900 meters) below the climbers' last known position and also picked up distress signals from the group's avalanche beacons.

The climbing party, including two guides from Seattle's Alpine Ascents International, set off on Monday for a five-day trek intended to take them up one of the toughest ascents of the ice-covered 14,100 foot (4,298 meter) massif.

They were last heard from via satellite phone on Wednesday evening, when they had reached a height of 12,800 feet (3,900 meters).

The climbers indicated they were fine and planned to reach the summit on Thursday but noted bad weather seemed to be moving in. A rain and hail storm swept through the area Wednesday and produced snow at higher elevations.

Alpine Ascents' website describes the Liberty Ridge hike as "one of the most technical and physically demanding climbs we do in the lower 48 states".

"The larger Alpine Ascents community and families are stunned and grief stricken," a statement from the group said.

The identities of the climbers have not been released.

Mount Rainier, an active volcano, is part of the Cascade Range and dominates the Seattle skyline. An ice fall on Rainier took the lives of 11 hikers in 1981.