Democratic senators said they plan to introduce legislation requiring the ceremonial uniforms be produced in the United States. 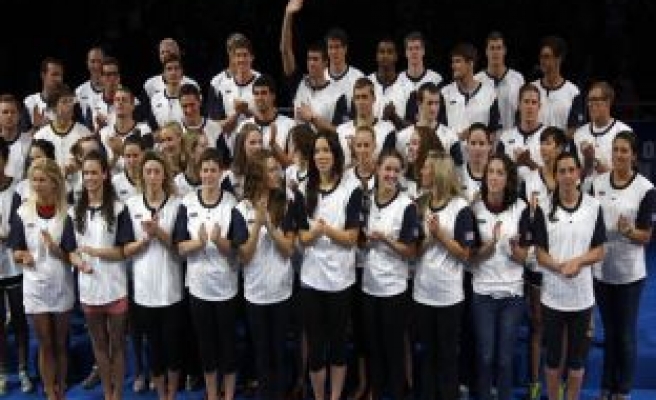 Ralph Lauren's stylish uniforms for the U.S. Olympic team, complete with a jaunty beret, have sparked a political row because the red, white and blue outfits were made in China.

With U.S. unemployment hovering just above 8 percent, politicians have spoken out against the uniforms for the London Games, which start later this month, and six Democratic senators said they plan to introduce legislation requiring the ceremonial uniforms be produced in the United States.

"At a time when too many Americans are looking for work and our manufacturers are closing factories, we need to do everything we can to keep jobs in America and not give the work of producing our iconic American uniforms for our Olympians to China," Senator Robert Menendez of New Jersey said in a statement announcing the measure.

The senators said they will introduce the "Team USA Made In America Act of 2012" next week.

"I call on the USOC (U.S. Olympic Committee) to do the right thing for this summer's team, and I call on my colleagues to help pass this bill to ensure we don't find ourselves in this appalling, embarrassing situation before the opening of the Sochi 2014 Winter Olympics," Menendez said.

The Committee said in a statement late on Friday that it was too late to change the outfits ahead of the summer games in London, but it had agreed with Ralph Lauren to make apparel for the 2014 Olympic Winter Games in the United States.

"With athletes having already arrived in London, and the apparel distribution process beginning this weekend, we are unfortunately not able to make a change for London," it said.

"We are absolutely committed, however, to working with our sponsors to ensure that the concerns voiced are addressed. To that end, Ralph Lauren has agreed to domestically manufacture Team USA's apparel for Opening and Closing Ceremonies for the 2014 Olympic Winter Games."

The proposal from Menendez and Frank R. Lautenberg, of New Jersey, Bob Casey of Pennsylvania, Chuck Schumer and Kirsten Gillibrand of New York and Sherrod Brown of Ohio would amend the Ted Stevens Olympic and Amateur Sports Act, which specifies requirements and rules for the United States Olympic Committee (USOC) and its members.

A spokeswoman for Menendez said it would be limited to ceremonial uniforms because some athletes may require specific high-performance items for their sport uniforms that simply aren't produced in the United States.

The move follows criticism of the uniforms from both political parties on Thursday.

Rep. Steve Israel, a Democrat from New York, said the issue was not just about a label, but an economic solution.

"Today there are 600,000 vacant manufacturing jobs in this country and the Olympic committee is outsourcing the manufacturing of uniforms to China? That is not just outrageous, it's just plain dumb. It is self-defeating," he said.

The U.S. Olympic Committee defended its decision to have Lauren design the outfits and oversee the manufacturing process.

"Unlike most Olympic teams around the world, the U.S. Olympic Team is privately funded and we're grateful for the support of our sponsors," spokesman Patrick Sandusky said in a statement.

"We're proud of our partnership with Ralph Lauren, an iconic American company, and excited to watch America's finest athletes compete at the upcoming Games in London." It urged Americans to "rally around" Team USA athletes who have "dedicated their entire lives to training for this one moment."

Ralph Lauren Corp said in a statement it "promises to lead the conversation within our industry and our government to ... increase manufacturing in the United States."