The storm was expected to provide only a small measure of relief from California's record, multi-year drought 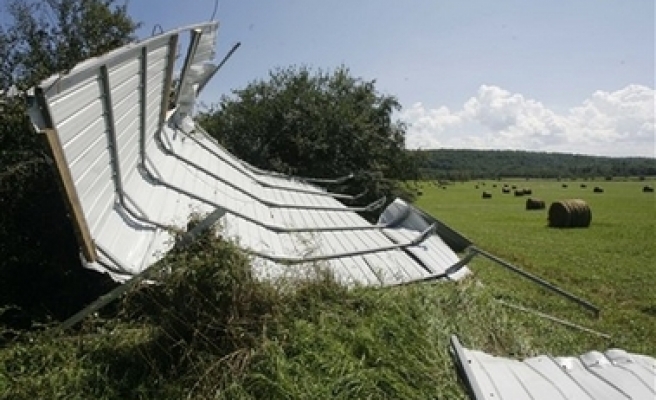 A major storm pummeled California and the Pacific Northwest with heavy rain and high winds on Thursday, killing one man, knocking out power to tens of thousands of homes, disrupting flights and prompting schools to close.

Some 240 departing and incoming commercial flights were canceled at San Francisco International Airport and others were delayed for more than two hours, airport managers said.

San Francisco's famed cable car system was replaced by shuttle buses, a subway station was shut down through the morning rush hour because of a power outage and flooding and the city's electrified bus system was halted in many areas, transit officials said.

The Embarcadero, the city's popular waterfront walkway, was closed due to flooding and some ferries were also canceled, stranding commuters.

Some streets and major intersections were flooded in the San Francisco area, including the westbound lanes of Interstate 280 in the East Bay suburb of El Cerrito, according to the California Highway Patrol.

Further south, in the city of Santa Cruz, a tree fell at an elementary school on Thursday morning, pinning an 11-year-old student's arm and shoulder until emergency workers could cut him free with chainsaws, police said. The child's injuries were not believed to be life threatening.

The launch of an Atlas V rocket was scrubbed from Vandenberg Air Force Base.

To the north in Washington state, roughly 135,000 customers were without power as of Thursday night, according to local utility companies. A commuter train that runs between Seattle and Everett was canceled for two days beginning on Thursday after a mudslide the day before, local transit officials said.

In southern Oregon, a homeless man camping with his 18-year-old son along the Pacific Crest Trail in the Ashland area was killed early on Thursday morning when a tree toppled onto their tent, the Jackson County Sheriff's Office said.

Portland General Electric Co and Pacific Power reported nearly 61,000 customers were without power on Thursday night, as a storm system with wind-gusts of 80 mph (129 kph) moved through Oregon.

"In certain parts of the West Coast this could be the most significant storm in 10 years," National Weather Service meteorologist Eric Boldt said.

The Weather Service issued flash-flood, heavy-surf and high-wind advisories, warning that torrential rains could lead to mudslides in foothill areas of California scarred by wildfires earlier this year.

The storm was expected to provide only a small measure of relief from California's record, multi-year drought that has forced water managers to sharply reduce irrigation supplies to farmers and prompted drastic conservation measures statewide, weather officials said.

As much as 3 feet (1 metre) of snow is predicted this week for the higher elevations of the Sierra Nevada mountain range. But meteorologists said many months of rainfall would be needed to pull the state out of the drought.

The Shasta Lake area of Northern California received 5 inches (13 cm) of rain overnight, and up to 4 inches (10 cm) were expected in California's Central Valley, the state's agricultural heartland, as well as in Sacramento, the weather service said.

Pacific Gas and Electric Co reported that some 276,000 customers lost power during the storm on Thursday, though roughly 90 percent had their energy restored by Thursday night.

The storm was expected to move into Southern California in time for the Friday morning commute, in what would be the area's second major storm in a week.