The marchers carried signs spelling out their goals: "Tax the rich," one placard said. "We Want Money for Healthcare not Corporate Welfare," read another. 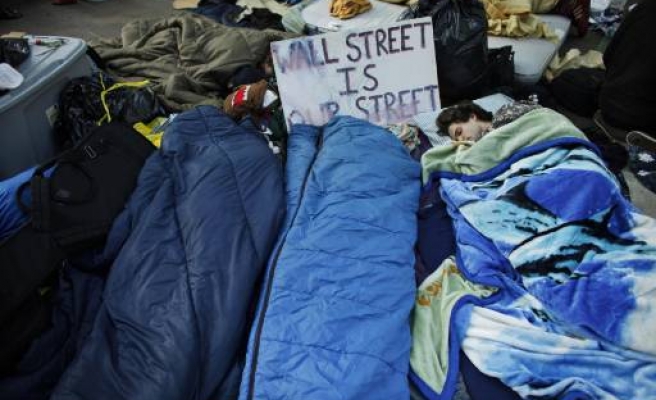 Police arrested scores of people taking part in a march on Saturday by several hundred protesters through the streets of lower Manhattan, the latest in a series of demonstrations in the past week against what they called corporate greed on Wall Street.

The marchers carried signs spelling out their goals: "Tax the rich," one placard said. "We Want Money for Healthcare not Corporate Welfare," read another.

The demonstrators were mostly college-age people carrying American flags and signs with anti-corporate slogans. Some beat drums, blew horns and chanted slogans as uniformed officers surrounded and videotaped them.

"Occupy Wall Street," they chanted, "all day, all week."

Organizers fell short of that goal. With metal barricades and swarms of police officers in front of the New York Stock Exchange, the closest protesters could get was Liberty Street, about three blocks away.

Police said at least 80 protesters were arrested during the march, which was meant to criticize a financial system participants said unfairly benefits corporations and the rich.

Most of the arrests were for disorderly conduct by people who blocked vehicle and pedestrian traffic during an hours-long march that wound north from the financial district into the bustling Union Square area. One marcher was charged with assaulting a police officer, police said.