The lack of criminal charges from grand juries in the New York and Ferguson cases have galvanized protests around the United States. 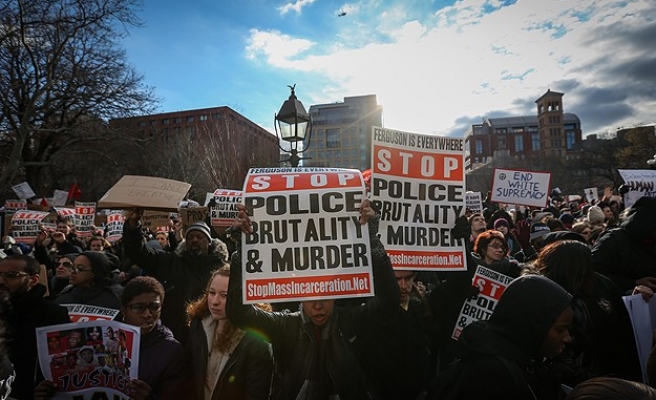 Thousands of demonstrators marched in Washington, New York and Boston on Saturday to protest against killings of unarmed black men by police officers.

Organizers said the marches were among the largest in a recent wave of protests against the deaths that have cast a global spotlight on race relations in the United States.

The rallies were mainly peaceful, though police in Boston said they arrested 23 people who tried to block a highway.

Officers in Oakland, California said they detained about 45 people for vandalism, failure to disperse, resisting arrest and other charges on Saturday night after thousands took to the streets.

Decisions by grand juries to return no indictments against the officers involved in the deaths of Michael Brown in Missouri and Eric Garner in New York have put police treatment of minorities back on the national agenda.

Protesters from around the country gathered at Freedom Plaza, a few blocks from the White House, then marched down Pennsylvania Avenue to rally near the white-domed U.S. Capitol.

Marchers, including many parents with children, chanted "No justice, no peace, no racist police" and "Hands up, don't shoot." Protesters carried signs that said "All men are created equal" and "Black lives matter."

Relatives of Eric Garner and Akai Gurley, who were killed by New York police, Brown and Trayvon Martin, slain by a Florida neighborhood watchman in 2012, all took part in the Washington rally.

"What a sea of people," said Brown's mother, Lesley McSpadden. "If they don't see this and make a change, I don't know what we're going to do."

In Missouri, a prosecutor on Saturday released documents related to the investigation into Brown's killing, saying his office had inadvertently held them back.

Protesters gathered in a one-block section of Pennsylvania Avenue and nearby public space. Organizers estimated the crowd at 40,000 to 50,000 people. A police spokesman said there had been no arrests.

Inmates in Boston's Suffolk County jail cheered and banged on cell windows as hundreds of protesters walked past outside near an entrance to Interstate 93.

Police said one person was arrested in New York after two officers were assaulted by protesters. Mayor Bill de Blasio, who has been criticized by the police union for not supporting the department, said the reported attacks marked "an ugly and unacceptable departure from the demonstrations thus far."

"Those who reject peaceful protest and provoke violence can expect immediate arrest and prosecution," he added.

Protesters chanted "How do you spell racist? NYPD" and some taunted police guarding the march route.

At the end of the march, the protesters raised their hands in mock surrender outside the police headquarters in lower Manhattan.

"The culture in America is embedded in slavery, in the courts and the politics, and the culture has to change," said marcher Kayode Leonard, 33, from Manhattan.

Cardboard effigies of lynching victims were left hanging from nooses at the University of California, Berkeley.

University spokeswoman Claire Holmes said all were taken down. "It has been unclear to us whether this was racially motivated or part of the protests," she added.