May: Brexit deal to allow trade ties with any country

Responding to US president, British PM says UK will be able to sign trade deals with third countries after Brexit 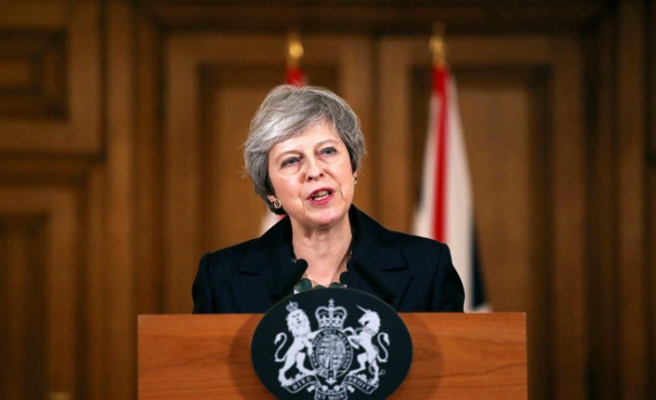 The U.K. will have an independent trade policy and make trade deals with countries across the world after Brexit, British Prime Minister Theresa May said Tuesday.

May’s remarks came after U.S. President Donald Trump said Monday the Brexit agreement with the EU may hamper trade between Washington and London.

“If you look at the political declaration which sets out the future framework for our relationship with the EU, it clearly identifies that we will have an independent trade policy and we will be able to do trade deals, negotiate trade deals with countries around the rest of the world,” May said, speaking to Sky News.

“As regards with the U.S., we have already been talking to them about the sort of agreement we could have in the future,” May said.

Trump said the deal struck with Brussels "sounds like a great deal" for the EU.

"I think we have to take a look at, seriously, whether or not the U.K. is allowed to trade, because you know right now, if you look at the deal, they may not be able to trade with us," he said.

"But right now, as the deal stands, they may not be able to trade with the U.S., and I don't think they want that at all. That would be a very big negative for the deal."

May is visiting Wales and Northern Ireland to look for support for her deal from businesses in a bid to secure a parliament vote due on Dec. 11.

Meanwhile, the leader of the Northern Ireland’s Democratic Unionist Party (DUP) Arlene Foster told BBC News that May’s trip is a “waste of time” and accused the prime minister of giving up on trying to secure a better deal for Northern Ireland.

The DUP leader already said on a few occasions that her party will object the withdrawal agreement and the political declaration signed with the EU, despite a “confidence and supply” pact with leading Conservative Party.

The U.K.’s Conservative Party had to sign a parliamentary alliance deal with the DUP after it lost the parliamentary majority following last year’s snap election.

May described the deal agreed with the EU as “the right deal for Britain” in a first attempt to win enough votes of British lawmakers for the upcoming vote over the deal.

Giving a statement in the House of Commons on Monday, May briefed the lawmakers about why she believed the deal was the only option to move on in terms of Brexit.

The House of Commons will vote on the withdrawal agreement and the political declaration on Dec.11.

The numbers in Commons show that May has a Herculean task to convince at least 320 MPs to vote for her deal.

The vote has already been debated since details of the Brexit deal were published last week by the British government. Among the naysayers are the opposition parties, Northern Ireland’s DUP and some Brexiteer members of May’s Conservative Party.

If May fails to receive support for the agreement, a vote of no confidence is likely to be triggered against her premiership, which may cause a more turbulent time in British politics and the U.K. may have to leave the EU with no deal.