Migrant caravan in Mexico waits for US to open doors 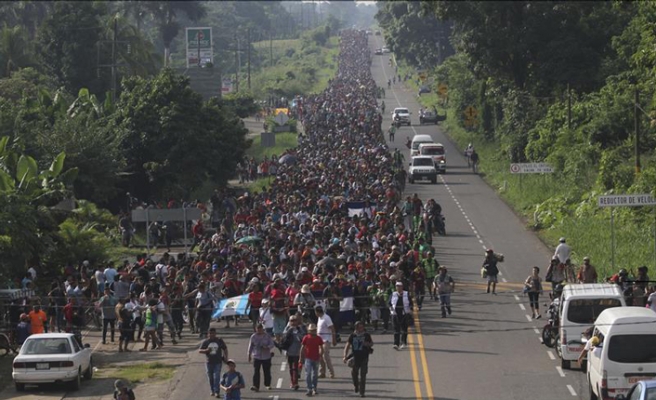 Over 9,000 migrants from mostly Central American countries have arrived in the Mexican border city of Tijuana in hopes of getting into the U.S.

One of the migrants waiting for America to open its doors is 39-year-old Maria Lila Meza Castro from Honduras.

Castro, mother of five, and her son were at the border when the U.S. patrol agents used tear gas against the migrants on Nov. 25.

Speaking to Anadolu Agency, Castro said she was looking over the U.S. side of the border when the incident happened -- not expecting such interference.

Showing an empty gas canister, which she said she found on the border, Castro said: “Suddenly they began firing gas bombs. One of these canisters were fired at where I was standing with my children. My son felt faint due to the gas and later myself.”

After getting some help from other people, Castro and her children managed to escape from the area, she said.

“The U.S. is the land of opportunities but Honduras is a poor country, that’s why we are trying to cross into the U.S.,” she said.

“We really don’t know what we will do here,” she said, calling for U.S. President Donald Trump to help them.

On Nov. 25. a group of migrants marched to the border on the grounds that the U.S. officials were processing their asylum applications slowly. Later some of the migrants tried to cross into the U.S. illegally and the U.S. border agents used tear gas against migrants including women and children.

Thousands of migrants have been waiting in Tijuana to cross into the U.S., many from a caravan that drew national attention and prompted Trump claim without providing any evidence it was an "invasion" and among the migrants were "criminals and unknown Middle Easterners."