At least five people were still missing after a gas pipeline explosion destroyed a neighborhood in a San Francisco suburb two days ago, killing four people. 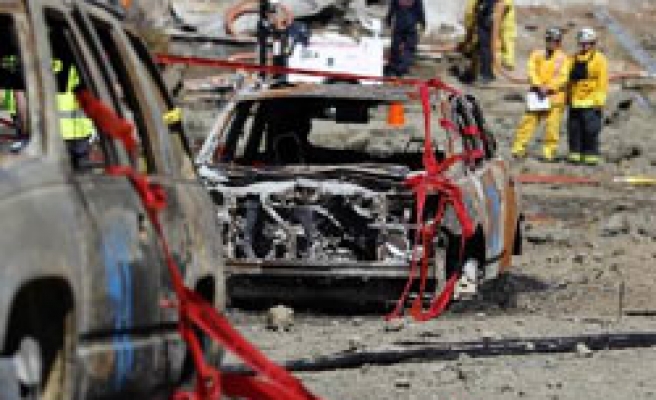 At least five people were still missing on Saturday after a gas pipeline explosion destroyed a neighborhood in a San Francisco suburb two days ago, killing four people.

The remains of the fire site are still being searched and at least five people are known to be missing, said Neil Telford, chief of police for the city of San Bruno, California.

As investigators from the National Transportation Safety Board continued their probe into the cause of the blast, residents gathered at a town hall meeting in search of answers.

Hundreds of people packed into a church on a warm afternoon, asking questions about insurance claims, the safety of gas lines, and when displaced residents might be able to return home.

Mayor Jim Ruane told the assembled crowd: "In a split second, flash, our lives changed forever. Some were lost. This has been a tragedy of immense proportions."

The company is still looking into why the pipeline ruptured. It said it is working quickly to examine other lines to ensure that they are safe.

The section of the gas line was installed around 1956, said Geisha Williams, senior vice president of energy delivery for PG&E. Pipelines are checked annually for leaks, she said, and the line in question was inspected earlier this year.

Their have been several media reports that, in the days before the explosion -- which happened on Thursday evening -- residents called PG&E and reported smelling gas.

Williams said the company did not yet know whether it had indeed received such calls. She said the company records all of its phone calls, and is combing through its phone records, which it will also turn over to the NTSB, which monitors gas leaks, to aid their investigation.

Roughly 270 homes were still inaccessible on Saturday, officials said, but the city plans to allow some people to return to those homes on Sunday.

The death toll from the incident remained at four, the San Mateo County Coroner's Office confirmed on Saturday, including a mother and her daughter.

California Lieutenant Governor Abel Maldonado attended the town hall meeting. Maldonado, standing in for Governor Arnold Schwarzenegger who was on a trade mission in Asia, has declared a state of emergency.

Maldonado said he has spoken with President Barack Obama, who indicated that he wanted to help San Bruno residents.

The blast left a massive crater. It took scores of firefighters until midday Friday to contain the fire touched off by the blast.