More than 100 protesters shouted "hands up, don't shoot" and other slogans as they rallied in the rotunda of the state Capitol in Jefferson City. 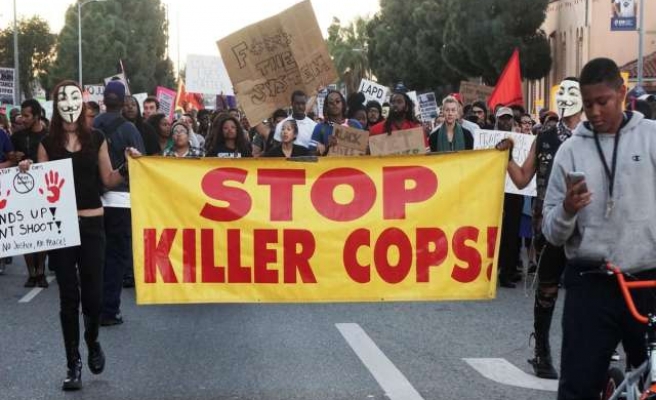 Activists protesting police treatment of black Americans concluded a 120-mile (190-km) march from Ferguson, Missouri to the Missouri governor's mansion on Friday, ending a 'journey for justice' tied to the police killing of an unarmed black teenager.

More than 100 protesters shouted "hands up, don't shoot" and other slogans as they rallied in the rotunda of the state Capitol in Jefferson City.

The demonstrators walked through a cold rain as they concluded a march that began Nov. 29 and was organized by the National Association for the Advancement of Colored People (NAACP).

Missouri Governor Jay Nixon said in a statement Friday he had met with NAACP leaders and was "confident that together we can make meaningful change... and build a future of greater peace, opportunity and fairness for all."

In an atmosphere at times reminiscent of the civil rights marches of the 1960s, the protesters said they encountered counter-demonstrators and hecklers along the way.

"For many, the fight has never ended," said NAACP staff member Jamiah Adams, who participated in the march.

In the small town ofRosebud, Adams said a group that included Ku Klux Klan members met the marchers with racist signs, epithets and fried chicken and watermelon, foods typically associated with racist stereotypes of black people. Someone broke a window of a bus accompanying the marchers in an incident that remains unexplained, she said.

The NAACP is calling for a number of changes, including the ouster of the Ferguson police chief, an end to racial profiling by police and the demilitarization of local police authorities.

Brown's Aug. 9 death, and the lack of charges against Wilson, have prompted expanding protests over what activists say is deeply engrained hostile treatment of African Americans by police, and an unequal justice system that refuses to hold police accountable.

In recent days, protests have spread to many major U.S. cities, after a grand jury in Staten Island decided not to indict a white police officer in the New York City borough in the death of a 43-year-old black man suspected of illegally selling cigarettes. Eric Garner died after being placed in a chokehold as officers tried to arrest him.